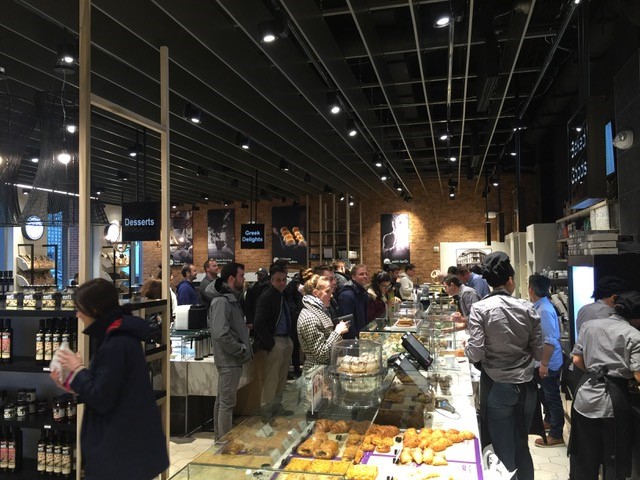 Fast casual dining chains have been on the rise over the last few years, as diners are looking for something quick and easy, but with fresher ingredients and more options than a basic burger and fries. These restaurant chains are the perfect alternative for those who don’t have the time to sit down for a lengthy meal, but still want the taste of a great dining experience. From authentic worldly flavors to just plain better burger options, these 11 fast casual chain concepts fit the bill for those looking to grab a quick bite while not breaking the bank or compromising quality.

Since their opening in 2007, this beloved restaurant chains has expanded to 71 locations coast-to-coast and gained a cult following for their large sandwiches and diverse toppings. While the innovative sandwich menu features Ike’s more than 800 specialty sandwiches, customer’s rave about the Dutch Crunch Bread and Ike’s signature Dirty Sauce. The secret recipe for Ike’s Dirty Sauce is closely guarded, but it has been described as a garlicky aioli that is toasted into their custom-made bread, which comes in soft Dutch crunch, French, sourdough, whole wheat or gluten-free rolls.

The Halal Guys represents the epitome of the American Dream. The story began in 1990 with three immigrants, opening a food cart in New York City. Authentic Halal food was nonexistent in the city, so they filled the void. Word spread about the unique American Halal food they offered and its fanbase quickly expanded. The continued, enthusiastic demand for its fresh, delicious food and warm hospitality justified its expansion to bring authentic American Halal food both across the nation and worldwide. The Halal Guys is now a global enterprise, with 94 locations and over 400 new restaurants in development worldwide.

Greek Xpress was founded in 2013 by a group of Greek American friends for one simple reason: they missed the food they ate in Greece. Every summer, their parents took them to Greece where they learned about their heritage and satisfied their growing appetites. A love for the food was instantaneous —from gyros and pitas, to souvlaki and baklava—they couldn’t get enough. When the pals came back home to America there just wasn’t anything that could compare. So Greek Xpress was created to share that food with the masses and they currently have 8 New York locations.

Since 2009, Curry Up Now has served up Indian flavors and ingredients in a friendly and recognizable way. The nationally known franchise began as a food truck and today has brick and mortar locations coast to coast. Signature dishes include tikka masala burritos, tacos, deconstructed samosas, naughty naan as well as Indian street food snacks like Thali Platters, Kathi Rolls, and Bhel Puri. Their diverse menu has something for everyone and is designed to support vegetarian, vegan, gluten-free and Halal diets. Chef and owner Akash Kapoor owns five locations and has 8 franchises across the US, with another 10 on the way this year.

Rise Southern Biscuits & Righteous Chicken is an award-winning, innovative fast casual franchise brand providing fresh, premium quality food at an affordable price. Founded by CIA trained chef Tom Ferguson, Rise serves homemade biscuits filled and topped with bold flavors and lots of love and are known for their Righteous Chicken. What makes them Righteous? It’s because they’re tenderized, brined in buttermilk, fried to golden-brown perfection and then served on a biscuit or as strips with your choice of toppings and sauces. Rise locations can be found across the Southern U.S.

MUTTS™ is an innovative fast casual dog friendly restaurant, bar and dog park that is totally unrivaled and offers delicious food for people and snacks for dogs. It’s also a beer, wine and cocktail cantina that’s adjacent to off-leash parks for small and large dogs. Dog lovers enjoy all their favorite things in one place: fantastic food and drinks, a great social and entertainment scene and a fun, clean, safe outdoor environment for four-legged friends. The private dog park offers daily passes, monthly subscriptions, or annual memberships. There is no admittance fee to eat in the Cantina.

In 2011, founder Itai Afek opened Wolfnights when he noticed a gap in NYC’s late-night food offerings and knew unique, filling sandwiches could be eaten on the go. He based Wolfnights on combining Mediterranean and Thai Cuisine into unique wraps centered around the idea of an ideal bite containing sweet, salty, savory, crunchy and chewy all at the same time. The gourmet wraps start as colorful rows of flavored dough grilled on a huge iron dome with flames licking up the sides right before your eyes, seconds from your tastebuds. The brand is based in Manhattan with plans to expand nationwide.

Established in 2011, BurgerFi is one of the fastest growing food franchise with better burger concepts with approximately 125 BurgerFi restaurant chains domestically and internationally. BurgerFi uses 100% natural American angus beef with no steroids, antibiotics, growth hormones, chemicals or additives. BurgerFi was one of the first better burger concepts to add a drive-thru to their contemporary, eco-friendly design layouts, expanded into “ghost kitchens” for rapid penetration into markets without existing physical locations, and continued to create innovative menu items like the popular Spicy Fi’ed Chicken Sandwich and a limited-edition White Cheddar Mac and Cheeseburger, which sold out nationwide due to its overwhelming success. To celebrate its 10th anniversary, BurgerFi is offering a TriFi meal special that includes BurgerFi cheeseburger, fresh-cut fries, and a draft beer for only $10 through February 28th at all locations.

GFG is the largest and fastest growing Greek fast casual restaurant franchise, renowned for their imported Greek Cuisine freshly prepared in-store. With authentic flavors at its core and a deep familial history of operating bakeries in Greece’s Lavrion of Athens, they present their one of a kind hospitality and cuisine, the “Greek way.” They serve Greek Café items, pastries, salads, entrees, and Mediterranean favorites with authentic flavor. They have 44 corporate stores open and in development across New York City, Connecticut, New Jersey, and Pennsylvania with plans for nationwide growth.

Jon Taffer, ‘Bar Rescue’ star and award-winning hospitality expert, launched his own innovative restaurant called Taffer’s Tavern. Jon knows a tavern is a place where people gather to eat, drink and share stories. Taverns are a gathering place and a landmark that are a beacon of camaraderie for their communities. Taffer’s Tavern is the quintessential pub, a place to gather with your old friends and make new ones along the way. Find ice-cold beers, outstanding signature cocktails, and mouth-watering savory food. The first of several openings this year has opened in Atlanta, Georgia.

This one-of-a-kind quick serve dumpling restaurant chains is about to open its first location in the East Village. The 24 hour restaurant will have a contactless ordering system and bring back the Automat of yesteryear with the most innovative technology of today and Zero Human Interaction (ZHI) throughout the entire grab and go process. The state-of-the-art food locker technology from ONDO, powered by Panasonic will provide the latest technology for meals to go, and will offer guests a safe and easy option to pick up orders at their peak freshness. Safety measures being implemented at Brooklyn Dumpling Shop will include contact-free ordering kiosks powered by TRAY, allowing customers to order ahead or scan a QR code at a TRAY kiosk, enabling them to order directly from their mobile phones. Orders will be sent to TRAY’s glove-enabled kitchen display system, then temperature controlled lockers for easy pickups. It looks like a restaurant of the future, but it’s making its debut in 2021 with more locations on the way.