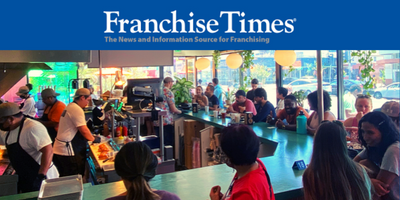 Nomoo founder George Montagu Brown’s journey to found a plant-based burger franchise is an unusual one, given his experience running an internet business in Costa Rica and operating a luxury resort. Now, he has his sights set on getting meat eaters to try his vegan creations.

“I really think we’ve cracked the code on the flavors and textures and overall experience that makes it just as popular for meat eaters as vegans,” Montagu Brown said. “Most of our guests aren’t vegan. That’s kind of why we’re here to transform fast food from the inside out.”

Nomoo (pronounced “No moo,” as in, without cows) is one of many plant-based burger franchises trying to become the next big fast-food chain. The plant-based retail market was valued at $7 billion last year, according to Good Food Institute, and more franchises are popping up in the United States.

The Los Angeles-based concept may seem like a dime a dozen in its home city—there’s five within a mile, according to Montagu Brown—but he’s convinced his food is delicious and unique enough to stand out in a crowd.

“Literally everything we do—from the shakes, to the chicken that we use in our ‘Plant-Fil-A’ hot chicken sandwiches—it’s all designed to be as realistic as possible,” Montagu Brown said. He developed a pea protein-based burger with food manufacturer Nestle Professional set to launch in October, and through the partnership is creating other proprietary products such as a vegan chicken burger and vegan cheese.

Nomoo is working with Fransmart to grow its footprint beyond its single store. Fransmart helped Five Guys achieve success and Montagu Brown is hoping for a similar result. He even thinks of Nomoo as Five Guys’ plant-based equivalent. “They didn’t invent the cheeseburger, they just did it a little better,” he said. “I think that we’re doing products that we do a little better than the others.”

Nomoo doesn’t use the word “vegan” when talking about its products, despite its lack of animal derivatives and meat in its entrees.