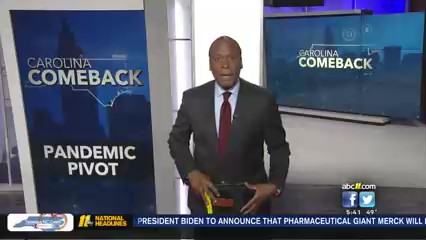 DURHAM, N.C. (WTVD) — “Pivot” is a word we’ve heard a lot during the pandemic and we’ve all had to make a quick turn in our lives. But one local restaurateur actually planned to pivot before the pandemic.

A year on from the start of the COVID-19 pandemic in the United States, we know that online ordering, contactless pickup and delivery, are all things every surviving food-service business had to incorporate into its business model in 2020.

The man behind Rise Southern Biscuits had the jump on almost everyone.

“We had been working on that for about a year and a half. So we were in really good shape when the pandemic hit,” said Tom Ferguson.

Ferguson founded Rise Biscuits & Donuts in Durham in 2012. Since then, the company has expanded to 16 stores.

Three are corporate stores and the rest are franchises elsewhere in the Triangle and out-of-state.

A couple of years ago, Ferguson decided to change the company’s business model and rebrand it as Rise Southern Biscuits & Righteous Chicken.

Of course, then Ferguson had no idea that would be the exact same time the coronavirus would end up arriving in America.

Thinking back on that fortunate timing he said, “I can’t claim visionary, but I can claim luck.”

When he realized the pandemic was inevitable, all he had to do was transition from cash registers to self-service kiosks and add curbside service.

Despite his preparations and good fortune, Rise still took a hit initially Ferguson recalled saying, “Our business dipped the worst company-wide 38 percent, but we were back out of that dip within two and a half months, back to normal sales.”

By the end of 2020, Rise had made a Carolina Comeback and then some.

“So, year over year sales for us right now, corporate stores are up over 25%. And company-wide sales is over 15,” Ferguson said.

The final pivot in the three corporate stores is underway now as they transition to heated lockers for contactless pick-up by customers and delivery drivers.

And it’s all automated.

“Your name shows up, you press the button, and the light blinks and you open up that locker,” said Ferguson who is looking forward to continuing the growth trend in 2021 despite the ongoing pandemic.