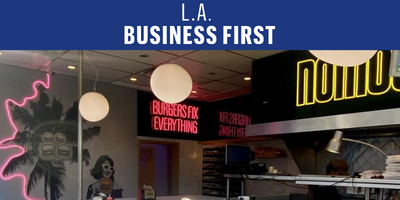 Anyone driving down Melrose Avenue in West Hollywood has passed Nomoo, a small plant-based burger joint that was once the original location of Johnny Rockets. Now, the diner is making the jump from meatless burgers and wings to tacos.

The plant-based fast-casual eatery is debuting its “cheezy-crunch” tacos at an all-day event Saturday, Nov. 12,using the brand’s seasoned meatless beef, specifically made for Nomoo by Nestlé. The vegan tacos are topped with avocado, ranch, salsa, cheddar “cheeze” and lettuce, tucked inside a hard and soft corn tortilla held together by melted “cheeze.”
Nomoo’s menu is concise, covering all the staples of a fast-food place with plant-based cheeseburgers, chicken sandwiches, chicken wings (made from fried oyster mushrooms), milkshakes and fries.
In addition to tacos, Nomoo is adding a crispy “chick’n” kale Caesar salad to the menu as its first entrée-size salad, made with local greens, non-GMO “chick’n,” house-made cashew “cheeze” crispies, golden beets, peppers and house-made Caesar salad dressing.

Nomoo founder George Montagu Brown said the mission of Nomoo wasn’t only to make great vegan fast food, but to fill a void in the marketplace by serving customers vegan food that’s comparable to popular fast food they already enjoy.
“Nomoo was born out of experimentation, really,” the U.K.-born restaurateur told L.A. Business First. “One day I thought, if we’re going to be the plant-based or vegan fast-casual concept all over the States, which is our goal, then why do we need to be limited to just burgers and shakes? Why can’t I take all the best items from all of the chains that we love and put them in one place?”
Drawing inspiration from best-selling fast-food items in the U.S., Nomoo serves vegan versions of Chick-fil-A’s chicken sandwich, In-N-Out’s double-double and Taco Bell’s cheesy gordita crunch, the blueprint for Nomoo’s “cheezy-crunch” tacos. 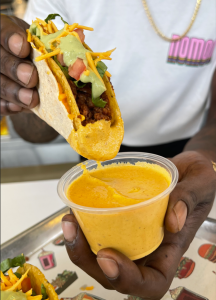 Nomoo upgraded its classic burger and BBQ “facon,” or fake bacon, burger using its new “beef” patty, a soy-free, non-GMO and gluten-free patty made from pea protein by Nestlé. It’s a step up, Montagu Brown said, from Impossible and Beyond Meat — two competing plant-based meat brands that Nomoo used for its patties before switching to Nestlé’s product. 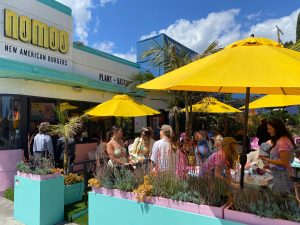 More Nomoos on the way

Nearly three years after launching Nomoo, Montagu Brown has his eye on expanding along the West Coast. Working with Fransmart, a franchise development company for emerging brands, Montagu Brown has started to get the ball rolling to franchise Nomoo, looking to open a new location in Orange County before expanding nationally.
The brand’s relationship with Fransmart is paving the way for Nomoo to become the first plant-based fast-food concept in the nation.

“The key is that it’s currently a void in the marketplace,” MontaguBrown said. “There is no other plant-based food chain. With themenu we have, with the quality of food we have, with the designand the relationship with Fransmart and Nestlé, we think it’sreasonable to think that we’ll be the first.”
In diversifying its menu, Nomoo plans to reach an even larger piece of the plant-based market, which is expected to become a $162billon industry by 2030, according to a Bloomberg Intelligence report.

“Nomoo is a business that’s going to have impact and enable people to eat great vegan food all over America, which is going to allow people to be vegan or at least eat a somewhat plant-based diet, which is really the goal,” Montagu Brown said. “I don’t think everyone’s going to become 100% vegan, but I think that we need to give people great alternatives so they can reduce their meat consumption and get into different phases.”