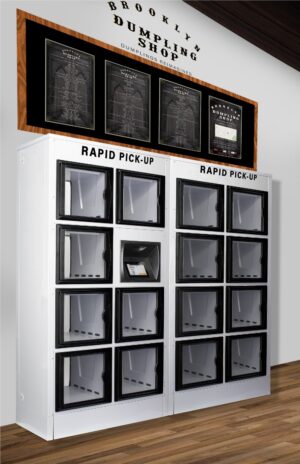 The New York restaurateur behind a new franchise called Brooklyn Dumpling Shop believes prime time has returned for the automat, where food is placed in hot or cold lockers for customers to grab and go.

“My attraction to the automat—cost effective, eliminating the chance of any kind of errors, and limiting your payroll,” said Stratis Morfogen, best known for his Brooklyn Chop House and founder of the Philippe Chow Restaurant Group.

He plans to use robotics, infrared sanitation and other technology to make Brooklyn Dumpling Shop super-efficient. “My goal is to get payroll down to 12 percent, and if I can do that I’ll revolutionize fast food,” he said.

“It’s 7 feet high and it comes in 3-foot sections,” he said. “The rows of lockers, they’re all digital, they’re all Instagrammable. When you have the hot dumplings or hot wontons,” the red light will come on. “Or if you have a beer, the blue will come on.”

“Hollywood Squares, it will be like that. That’s the first time I’ve used that analogy,” Morfogen said with a laugh.

At his fine-dining Brooklyn Chop House, he had dedicated a small area in the kitchen to making dumplings, with flavors such as Philly cheesesteak or French onion soup or peanut butter and jelly, and they started selling like crazy while requiring just one staff member to steam the dumplings and pump out the orders.

Dan Rowe, CEO of Fransmart and a well-known backer of franchise concepts from Five Guys to Qdoba to Halal Guys, hit up Morfogen on social media and a partnership was born. “I reached out to him one day, and said I’m in New York a lot, let’s meet up. He brought out all these dumplings, and I got sad, because I wasn’t working with him,” recalled Rowe.

“To me it was the most amazing experience eating this food. It’s just really, really, really good. It comes out lightning fast. And the more I realized, he’s an ideal franchisor,” because Morfogen is focused on the economics of the unit. “It’s what I preach” to all franchise clients, Rowe said.

A word of caution amid the enthusiasm: Not a single Brooklyn Dumpling Shop is open yet, although three corporate stores in New York are in the works, Rowe said. Yet he believes they will do “$1.5 million to $2 million out of 500 square feet. For the cost of a Subway, these things are going to do more than a Five Guys. He’s figured it all out, anywhere in the world.”

Rowe signed on as a consultant for the concept and hopes to become an investor. “It’s an ongoing conversation. I would buy personally every share he would sell,” Rowe said. The franchise disclosure document is in the works now and the plan will roll out by the first or second quarter, he said. “It’s sort of the next new thing.”

The automat idea, though, is very old, dating back to 1895 in Germany, and took off in New York City after the last pandemic, explained Morfogen. Joseph Horn and Frank Hardart opened their first New York automat in 1912, and built about a half-dozen locations. Post-Spanish flu, their automats took off.

“In the ’30s and ’40s and ’50s and ’60s, it was glorified. It was very, very successful. But come the 1970s, they didn’t have technology for dollar bill receivers, they didn’t have credit card processors,” Morfogen said. “That was the death of the automat.”

He believes Brooklyn Dumpling Shop will be its rebirth.”I’ve owned 19 restaurants, I’m a third-generation restaurateur. I’m 52 years old, I’ve been an entrepreneur since I’m 19. I’ve always went with how can we improve it. And with the layoffs of COVID, I made all my brands really extremely efficient,” Morfogen said.