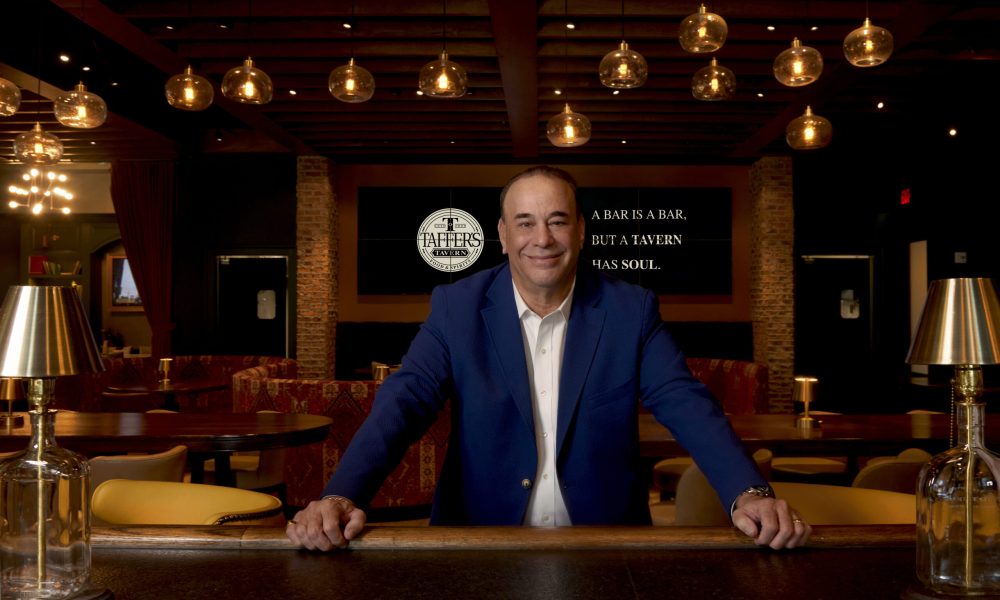 Public health restrictions imposed to slow the spread of the Covid-19 pandemic are loosening, people are dining indoors again in greater concentrations, and the Memorial Day weekend offers renewed optimism for bar and restaurant owners in Greater Washington who have struggled to stay afloat.

The way celebrity entrepreneur Jon Taffer sees it, all of that suggests the region’s restaurant industry is poised for a rapid rebound, and he’s putting his money where his mouth is. Taffer’s Tavern, the franchise founded by the star of Paramount Network’s “Bar Rescue,” has partnered with Sterling-based Cuisine Solutions to open at least three new restaurants in the D.C. area. Up first is a location at 700Sixth St. NW in Penn Quarter, slated to open by the end of the year, though staffing shortages and construction pricing could push that into 2022.

“Human behavior can sometimes be nationalized, if you will, and I think what’s common to the Washington, D.C. area, as well as other areas, is people have been locked in their houses, they’ve been locked in their offices, they miss the social experience, they miss going out, and those first few times you go back to a restaurant is really enjoyable when you’ve been away so long and I don’t think Washington is any different in that regard,” Taffer said in an interview. “So we’re projecting a Roaring Twenties in Washington, D.C., in the restaurant space.”

The pandemic has shuttered dozens of bars and restaurants in the D.C. area, with downtown businesses hit particularly hard given their reliance on a daytime population of workers who remain largely virtual. But a growing number are projecting at least the partial return of employees to the office later this year, and Taffer believes that, too.

He’s particularly bullish on Penn Quarter given its balance of residences and offices, the draw from venues like Capital One Arena and its Metro accessibility.

Cuisine Solutions, enlisted to help develop the food program for Taffer’s Tavern, specializes in sous vide products, or food that has been slow cooked and then refrigerated or flash-frozen for distribution. It’s a practice that isn’t universally embraced, but Taffer said those that criticize it probably have never tried really good sous vide food.

The Taffer name could be an asset or a liability in Greater Washington. Many area residents still associate “Bar Rescue” with an episode from 2012 that featured a Silver Spring establishment called Piratz Tavern.

Taffer helped the struggling establishment transform into Corporate Bar & Grill, a concept tied to its proximity to employers including Discovery Inc. The conversion didn’t stick, and the establishment switched back and later folded. While the episode was nearly a decade ago, Taffer still recalls the uphill battle it was to convince the bar’s employees, including One Eyed Mike, who lost his eye in a sword fight, to make the switch.

“I always remember something very interesting about that bar, and that is those people truly believed that they were pirates,” he said. “They spoke pirate 24 hours a day. I’m such a nutcase that I went out to the parking lot with a flashlight and looked in their cars, and their cars had all pirate clothes in them. When I tried to train them, they couldn’t speak non-pirate. They were pirates 24 hours a day.”

Creating a sustainable restaurant isn’t about the food itself, Taffer said. It’s more about the experience., and he constantly tweaks his menu if it seems items are falling short of his expectations. Washingtonians are no less discriminating, he said, and he aims not to disappoint when the Penn Quarter location opens. Many D.C. residents are world travelers, they have discerning tastes, and know a quality piece of meat when they bite into one. Or sip, as the case may be.

“We have an incredible cocktail program, as you probably would expect from us,” he said. “Our cocktails have bubbles that pop at the table, wood chips that are smoking when they’re brought out to you — the flavor profiles, the visuals, the presentations the vessels that we use. I’ll venture to say I believe, when we open, we will set the standard for cocktails programs in the city of Washington. I can’t imagine there will be a program that has as deep a profile.”