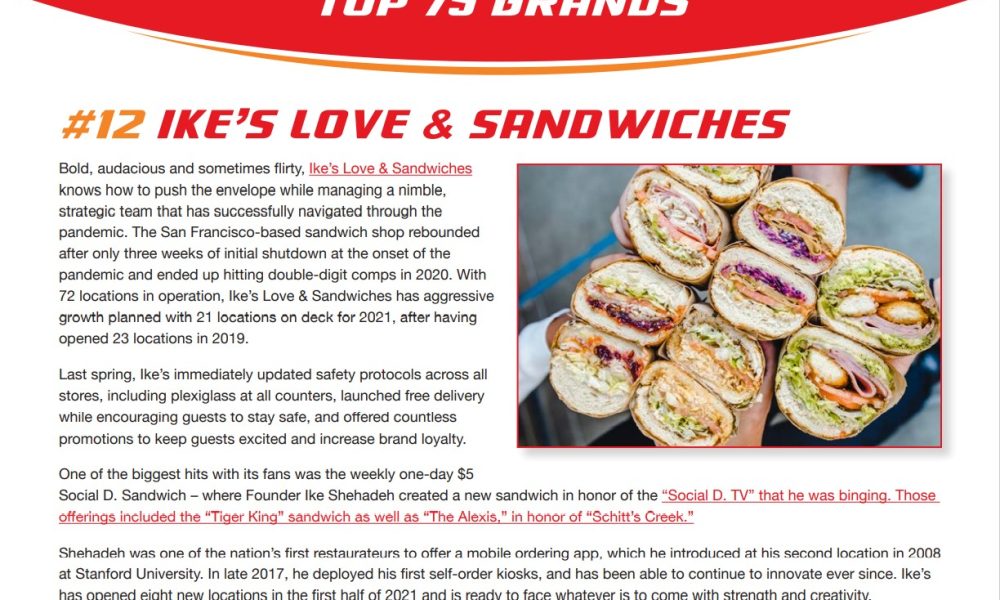 Bold, audacious, and sometimes flirty, Ike’s Love & Sandwiches knows how to push the envelope while managing a nimble, strategic team that has successfully navigated through the pandemic. The San Francisco-based sandwich shop rebounded after only three weeks of initial shutdown at the onset of the pandemic and ended up hitting double digit comps in 2020. With 72 (75 as of May 26, 2021) locations in operation, Ike has aggressive growth planned with 21 locations on deck for 2021 after having opened 23 locations in 2019.

One of the biggest hits with its fans was the weekly one day $5 Social D Sandwich – where Founder Ike Shehadeh created a new sandwich in honor of the ‘Social D TV” that he was binging. Those offerings included the “Tiger King” sandwich and “The Alexis” in honor of “Schitt’s Creek”.

Shehadeh was one of the nation’s first restaurateurs to offer a mobile ordering app, which he introduced at his second location in 2008 at Stanford University. In 2017, he deployed his first self order kiosks, and has been able to continue to innovate ever since. Ike’s has opened eight new locations in the first half of 2021 and is ready to face whatever may come with strength and creativity.