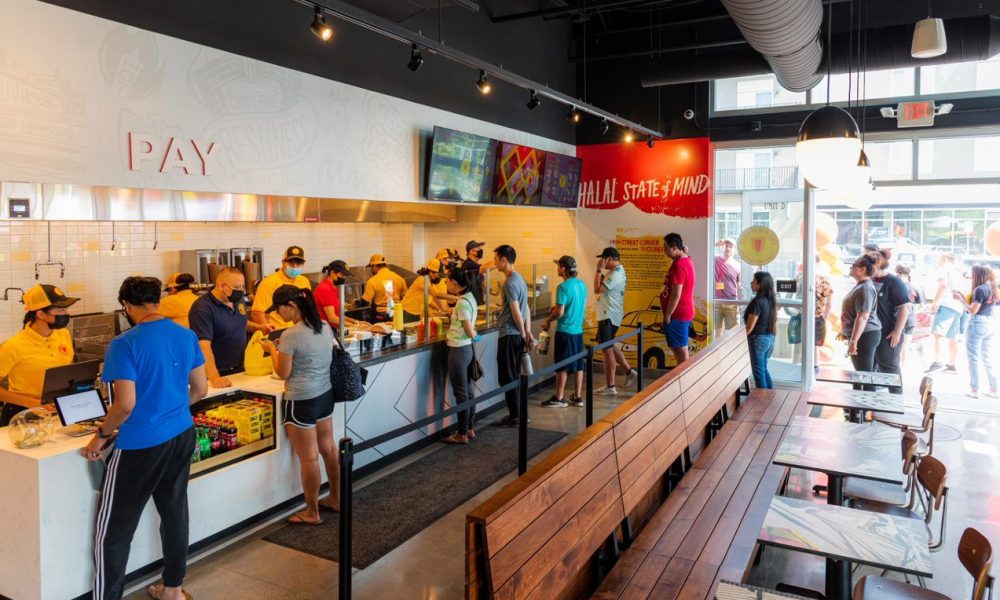 What: The Halal Guys

What we saw: First we had to find the place. Coming off Interstate 225, it’s tough to spot from Alameda Avenue or Sable Boulevard, but once you pull into the still-under-development City Center complex, you’ll see the Halal Guys name emblazoned in red by a yellow logo diagonally across from the under-construction Parkside Eatery.

Those colors reflect the Halal Guys’ history, explain franchise owners Chris Bui and Kevin Than. The yellow is a nod to the taxi drivers who frequented the original street carts in New York City, while red is the color of the chain’s fiery hot sauce.

Bui and Than both grew up in the Denver area. Than went to school in Littleton and Bui was raised in Aurora, making the fact that their first location landed there extra special. And yes, that’s first location: The two are on board with the Halal Guys corporate office to open more outposts in Colorado. “As many as we can,” Bui says. They’re eyeing spots from Boulder to Colorado Springs, including downtown Denver, though they’re not sure where number two will pop up yet.

The business partners met each other through their careers in finance, but always had entrepreneurship on their minds. They looked into several other brands before securing a franchise agreement with the Halal Guys, which Than knew from a trip to NYC when he tried food from one of the carts over a decade ago. “Not only do we love the brand, we also love the state,” Bui explains.

The Aurora location is the first to boast a refreshed interior design for the brand, with illustrations of the original food carts (and the lines of hungry people waiting for food) adorning the walls instead of the photos that hang at other locations. Also new are modern details, like the red “Halal Fresh” message scrawled on a back wall over yellow and tan tiles (sure to be a spot where many combo bowls are photographed for Instagram).

The line where you order is the familiar fast-casual setup used by homegrown quick-serve chain Chipotle. Choose your own adventure as you go down the line, adding options like jalapeños, onions and olives along with the hot sauce — which, it should be noted, is actually spicy — and the popular white sauce that’s a hallmark of the Halal Guys.

What surprised us: The white sauce. It’s essentially mayo with lots of flecks of black pepper. Nothing about it seems like something that should cause an entire fandom to form. But admittedly, it did really elevate the combo bowl. Would we drive to Aurora and wait in a line to buy a bottle to go? (That’s an option.)  No. But would we ask for extra on top if we find ourselves at the Halal Guys again? Totally.

The combo platter, which is the most popular item and includes both beef gyro and chicken, is solid. The menu also includes pita-wrapped sandwiches along with platter options, as well as hummus, baba ghanoush, crinkle fries and falafel. For dessert, there’s baklava and chocolate chip cookies.

The meal was similar to one you’d get at local Mediterranean spots like Jerusalem on East Evans Avenue, but the Halal Guys doesn’t brand itself as Mediterranean. “It’s American halal food,” Than says, again referencing the fact that the brand grew from its food-cart origins because of its popularity with NYC taxi drivers, most of whom are Muslim.

Some superfans of the Halal Guys got a sneak peek of the Aurora location during a teaser event, and the spot was open to train staff for a short time before closing down for a rest day. The grand-opening festivities —which include prizes, giveaways and more — begin June 18.

The In-N-Out just down the street from the Halal Guys still had a long line of fans waiting in the drive-thru at lunch time recently, and Than and Bui are optimistic that they’ll soon see a line forming out their door.

The line “is part of the experience,” Bui says, “and we won’t be shuffling guests through like cattle; we won’t sacrifice quality for speed.”

Our advice if you’re planning to visit during the grand opening: Bring sunscreen.