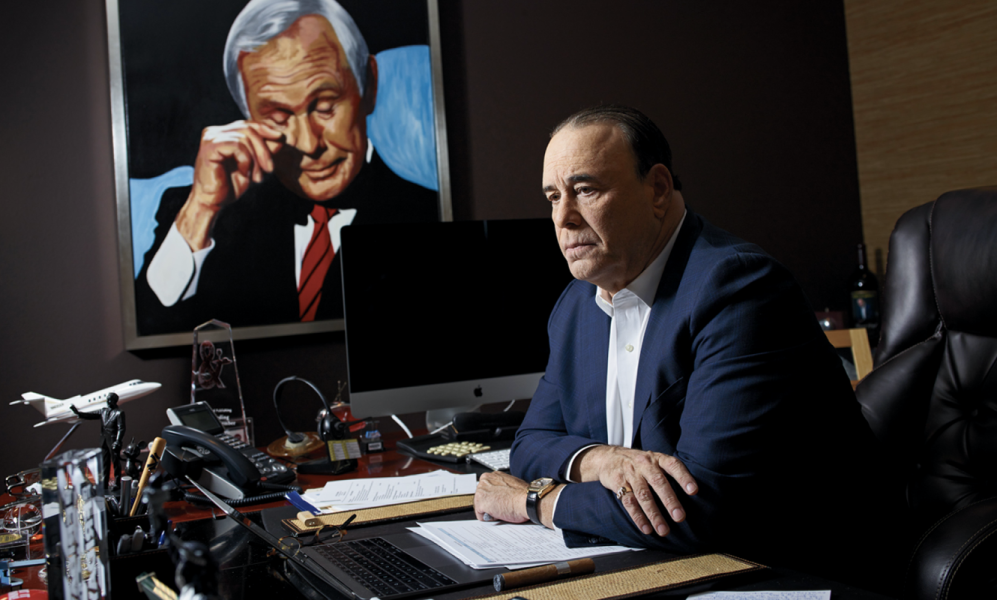 AS HOST OF THE television show Bar Rescue, Jon Taffer shows up to fix other people’s restaurants. Now he’s also looking at the casual-dining sector more broadly, and he sees signs of trouble: “They’re dinosaurs,” he says of many brands that have been around for decades, “and I think they’re facing extinction. All the Uber Eats in the world can’t bail them out.” His diagnosis: rising labor costs, plummeting meal prices, and an economy in flux. That’s why starting this year, Taffer plans to spend a lot of time in restaurants of his own. He’s launching a new franchise restaurant concept called Taffer’s Tavern, which is designed for efficiency—with minimally staffed, robotic kitchens cooking vacuum-sealed food, and data-driven decisions everywhere. The first unit is expected to open in Atlanta in April this year. There are agreements to sell another 50 by then as well, and a television tie-in is in the works. “This is my baby,” he says. “Not only can I build immense value with this, but it could be a heck of a business model.”

This past fall, as he was negotiating the TV deal and developing his first test kitchen, Taffer spoke to Entrepreneur about the franchise industry, how he developed his concept, and why he believes all restaurateurs need to become more efficient.

You’re experienced in the hospitality space, but this is your first step into franchising. Why do it?

I found the casual-dining sector to be incredibly frustrating. I look at these companies doing all-you-can-eat appetizers, two-for-one entrées, $10 all-you-can-eat meals. They’re fighting for customers while, at the same time, labor pools are shrinking. We’re approaching $15 minimum wages—so labor costs are through the roof, and we’re discounting food. The numbers don’t work. It’s going to implode. I said to myself, Somebody’s gotta create a franchise model that works. How do I solve that with robotic cooking, and what kind of approach to cuisine production can I take that assures quality and consistency, and attacks the labor issue? So I’ve been working on test kitchens with sous vide cooking.

Sous vide—that’s vacuum-sealing food in a bag and cooking it in water, right?

I can take a beautiful steak, or any protein. I can season it. I can wrap it in a sealed, airtight, sous vide plastic package. I then ship it. It’s still fresh, with unbelievable quality and consistency. The seasoning is done by me, not the franchisee. Now that package of steak lasts three times longer on the shelf. There’s no exposed protein. There’s no blood dripping anywhere. There’s none of the cleaning or sanitation risks associated with protein. And then the food is prepared in water ovens. It can’t be overcooked. It’s simply put on a grill to sear when it’s done. We’ve taken back-of-house labor costs down almost 60 percent. Our kitchen will never run with more than two people, two and a half people.

But now aren’t you running lots of off-site locations to prep the food, which you’ll have to staff?

There are three massive sous vide companies in the country. One of them creates the sandwiches you see at Starbucks and produces a million a day. So we spec the product, we spec the seasoning, and they produce the product and then handle the supply-side logistics for us. Think about this. Food lasts three times longer. No open proteins. Rather than weeks of training in the kitchen, I have hours. I don’t have the prep. I don’t have the cleanup. Don’t have the grease. I realized, wow, I found an incredible franchise model.

Now you need franchisees to buy into a new idea. What’s that been like?

We’re not open yet, and we’re close to selling more than 50 locations! I partnered with Fransmart. They took Five Guys from four restaurants to 2,000. They took Halal Guys from three stands to 400. They took the concept to market for me, and every person we’ve sold it to has millions of dollars of liquidity, has food-and-beverage-operation experience, and is a franchisee for another brand. That way, we’re with people who know how to respect franchise standards, know how to operate within a franchise envelope, how to respect food standards and recipes, and have the financial wherewithal.

“You’re still going to have a human being come up to you and tell you what ingredients are in the food. We’re just putting a lot of tech around that human.”

As experienced franchise operators looked at your concept, what questions did they have that surprised you?

The premise of robotic cooking—of sous vide—raised their eyebrows. They needed to understand that the quality is better with sous vide than not. Because if I send you a frozen hamburger, or a hamburger that’s fresh, some kid who’s 18 or 20 years old is going to season that thing on the line. You get too much salt, not enough salt. There is a certain inconsistency that happens when things are done at the unit level. But we preseason it when we package for sous vide. So we have more control over products, consistency, and quality than anybody else does. Once they understood the science of sous vide and where we’re going, that’s when everybody lined up to come on board.

Your message seems to go against a lot of conventional wisdom. I mean, food brands are always big winners in our Franchise 500 list. But here you’re saying: This industry is facing trouble, so let’s rethink it. Do you get pushback on that?

The answer is, I’m shocked. Because we’ve heard from mostly multi-unit franchisees. Every one of them has some tired buildings, some tired concepts. I can’t mention names, but a company is looking at converting a number of units. We’ve heard from two airport space operators; we’re in discussion at 12 locations on that. There’s another individual with hundreds of franchise units; we’re talking with him about it. So yeah, what we’re finding is two things: People are interested in building new Taffer’s Taverns, but existing franchisees are really interested in converting underperforming units. And that’s exciting because these are people who know the business.

Let’s go beyond food. What else is new at a Taffer’s Tavern?

If you went to a Taffer’s concept, wouldn’t you be more inclined to try a beverage? I’m putting together what I believe is the world’s best beverage program. I mean, everything from cotton candy to ice pops is in these cocktails.

That sounds time-consuming to make! Will you have to staff up more there?

When you look at a drink that takes four minutes to make, I’ve got to sell four times the amount of the drink that takes a minute to make. And that’s where mixology economics start to fall apart. And I can’t charge four times higher for a drink. So we will do some premixes; we’ll prebatch certain things. Our concept is one-minute mixology. The best drinks you’ve ever had in your life, with the finest ingredients, but we’re getting it out in a minute.

“I’ve been able to do my brand through media. This is me bringing my brand to the street.”

This sounds like a restaurant driven by efficiency. Where else are you focusing?

Yes. For example, we’ll provide music programs targeted to each restaurant. If Elton John is coming to a city, that city will get a propensity of Elton John music. In a bar environment, music and entertainment drive length of stay. Length of stay drives sales. The longer you stay, the more you drink. We can connect hourly revenue reports to what music is playing each hour. We can track beats per minute to sales.

“Once they understood the science of sous vide, that’s when everybody lined up to come on board.”

What about at the tables themselves?

The servers have full-service tablets they’re using at the table. But unlike restaurant chains where you sit down at the table and order on a tablet, we’re not going there. You’re still going to have a human being come up to you and tell you what ingredients are in the food. We’re just putting a lot of technology around that human.

You’ve released products like cocktail mixers before, but this is something entirely new for you. How are you feeling?

I’ve been able to do my brand through media. This is me bringing my brand to the street. Everything that happens there is so important, because it could tarnish the brand. I’m worried about doing it right, and I’m also so passionate about doing it right. Make no mistake: This is my baby. So, for example, we’re opening in Atlanta. I’ll be in that market for three weeks. I’ll be at as many restaurant openings as I can. I’ll be very involved in it. I can’t wait to get there.