Atlanta Orders In: TV personality says Taffer’s Tavern not built to be trendy 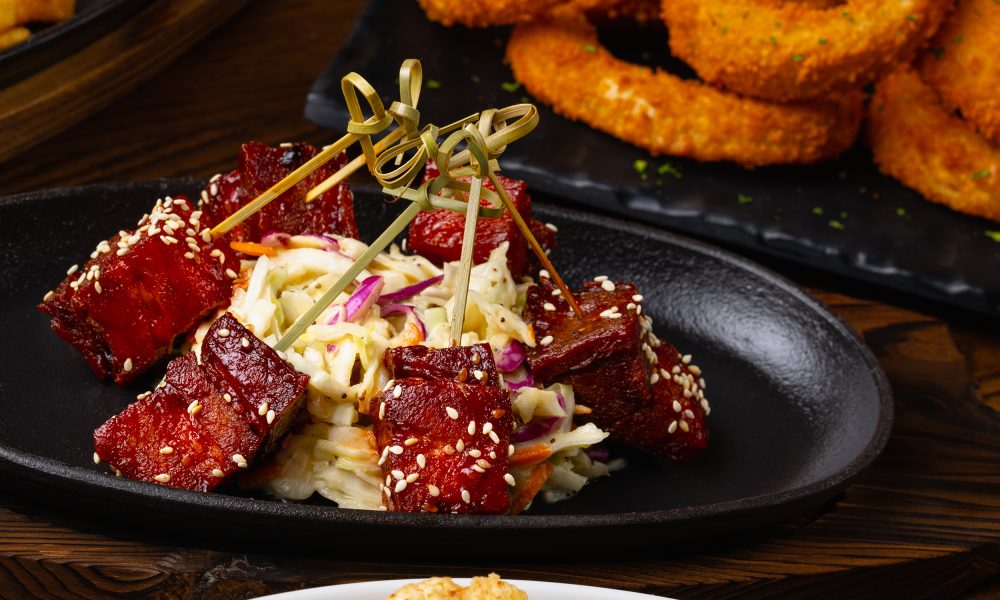 In November, the first Taffer’s opened on Main Street in Alpharetta. At least three more locations are planned for Georgia, with additional units planned for Washington, Boston, Las Vegas and the Florida panhandle.

The menu features cocktails, of course, along with what Taffer described as “elevated tavern food,” and an inviting atmosphere that stresses hospitality.

Look for hearty offerings, such as slow-cooked pork belly skewers, a short rib braised with red wine and beer, and a roast beef au jus sandwich with caramelized onions and Swiss cheese on toasted ciabatta.

Drinks include the Campfire, with Taffer’s trademarked brown butter rye whiskey, bitters and simple syrup. And, for tasting, there’s a sampler platter with four of the tavern’s most popular cocktails.

During a recent phone call, Taffer noted that Taffer’s Tavern was not built to be trendy.

“I’m of the belief that every trend ends,” he said. “We don’t put goat cheese on things. We’re not that kind restaurant.”

Taffer explained that, when he first came up with the concept, some two and a half years ago, restaurants were struggling to find employees.

He answer to that was “a restaurant with a kitchen of the future, that would use half the labor force to produce high-quality food.”

By the time Taffer was ready to roll out his first tavern, the pandemic had hit.

“We realized, not by intentional design, but as a consequence of our technologies, that we had probably the safest kitchen in America,” he said. “It was very COVID-safe, with these new cooking processes we created.”

Those processes do not include a stove or a hood. Instead, there’s sous vide cooking, and combi ovens that utilize steam, convection and ultraviolet light.

Another new wrinkle is a contactless locker system for to-go orders, which eliminates the need for customers or delivery drivers to enter the restaurant.

“It’s actually built into the exterior wall of the restaurant,” Taffer said. “So, one side of the locker faces the kitchen and other side of the locker is literally outside. It’s extremely efficient, and really convenient for guests.”

Since metro Atlanta has become the test market for much of what Taffer is trying out, I wondered, why was Alpharetta first?

He said he wanted the restaurant to be part of the community. “We chose the word tavern, because taverns are typically part of a community. That coveted third place. It’s not home. It’s not work. It’s that third place that you go.

“When you talk about community, Alpharetta, the town square, the location where we are — we are in the center of the community. And it fit the exact profile of what we want for Taffer’s Tavern.”

As for the future of bars and restaurants, Taffer said he sees bad news and good news.

“I think it’s going to be roaring ’20s, starting this summer, and into the fall,” he said. But, he thinks about 38% of the restaurants, and 40% to 45% of all the independent bars, will be lost nationally “by the time this is all over.”

However, Taffer pointed to the crowds in places like Miami and Las Vegas during spring break as a sign of the pent-up demand that will build demographically in stages, from younger to older customers.

“People are looking forward to going out again,” he said. “When you think about the fact that we’re going to have the same market conditions, as far as demand by fall, but with 38% less capacity, that, to me, is the definition of boom town.”

What I ordered: pork belly skewers with Asian barbecue sauce and coleslaw; roast beef au jus sandwich with a side of fries; flatbread with creamy spinach and artichoke sauce, cherry tomatoes, melted mozzarella and fresh arugula; creme brulee cheesecake with sliced fruit and mango drizzle. Everything was well-executed, if not exactly mind-blowing, which is sort of the point, I think.