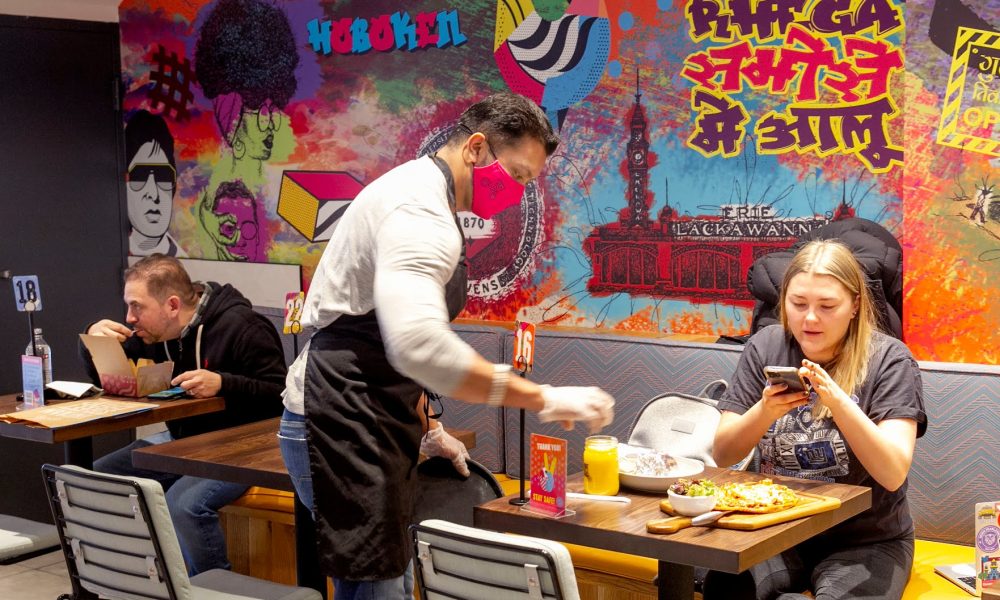 He’s not only a franchisee with Curry Up Now, an Indian franchise restaurant, he’s also an ER nurse.

Pritesh Benjamin was convinced he had achieved the American dream.

The 42-year-old Piscataway resident had rerouted his life, from high school dropout in his native India to emergency room nurse at Robert Wood Johnson University Hospital in New Brunswick. His salary was six figures. The Porsche he drove was just one of several luxury sports cars he owned. The ascent to affluence, he admits, made him arrogant.

Looking for ways to invest his money, Benjamin brokered a deal with the Indian fast-casual food chain Curry Up Now to open one of the company’s first East Coast locations. A grand opening in Hoboken was planned for the end of February 2020. The plan was to be a hands-off owner while still working at the hospital.

The COVID-19 pandemic struck New Jersey a few weeks later. Suddenly he was needed more than ever — not just in the hospital, but at the restaurant.

“I had to take off my scrubs, put my apron on and start working,” Benjamin said.

While he had no previous experience working in the food industry, he suddenly found himself running the business, while still working at a hospital inundated with coronavirus patients.

With no days off, Benjamin has spent the past year working five days a week at Curry Up Now, while twice a week pulling 12-hour shifts in the RWJ emergency room. He’s fighting to keep both COVID-19 patients alive and his restaurant open, all while hoping to not get sick himself or spread it to his family — he and his wife have an 18-month-old son — or coworkers.

”I’m extremely proud of him. He has this pressure on him,” said Tejasvi Patel, Benjamin’s wife. “This is the biggest investment of his life. I’m sure he’s probably very sad and worried. But he’s never showed that to me.”

The scrubs Benjamin wears stay at the hospital — and the shoes he wears while working don’t come home with him.

The hospital’s safety measures gave him peace of mind, and he used his medical knowledge about the virus to make sure the restaurant was as safe as possible as well. He answers every question his employees had about the pandemic and made sure to enforce strict safety procedures — masks at all times, constant hand-washing and glove-changing and sanitation of work stations. Thankfully no Curry Up Now employees have caught COVID-19.

Neither did Benjamin, and he was one of the first New Jerseyans to get a COVID-19 vaccine.

But as he treated coronavirus patients and served customers, it was always on his mind.

Benjamin knows working at a hospital and a restaurant is risky. Even though his position as a nurse and his wife’s job as a pharmacist both pay well, they had invested “every single penny” in the restaurant. And it isn’t just his family depending on the success of Curry Up Now. His employees are relying on it, too.

“I feel responsible for my crew to make sure that they have employment,” Benjamin said. “I could shut the store off and go sit over there at home and I have my paycheck coming in. But what about them?”

As draining as the experience of working every day in two highly stressful environments was, there was never a time when Benjamin didn’t think he could keep going.

“I was so zoned in that there was no time to think,” Benjamin said. “It was like one thing after another. Like. ‘OK, I’m working here two days. Tomorrow morning, I have to be there. I need this. I need that. Is this right?’ It became a routine for me.”

Pritesh Benjamin servers a customer at Curry Up Now in Hoboken, which he owns. But twice a week he’s an ER nurse at RWJ University Hospital in New Brunswick. He balances working at the restaurant, which opened right before COVID-19 hit, and battling the coronavirus at the hospital.

From scrubs to chef’s knives

Curry Up Now, which specializes in Indian cuisine served in burritos, bowls and other creative ways, went from having a line out the door to a ghost town when the pandemic more or less sent New Jersey into a lockdown.

Benjamin didn’t just have to learn how much food to prepare, given how unpredictable business was early in the pandemic. When one of his chefs couldn’t work because he feared he had COVID-19, Benjamin had to learn — on the fly — how to prepare the food. His technique for julienning cilantro is still a work in progress, but he’s made strides, he says. But rather than get frustrated at the unexpected situation, he’s embraced the challenge and looks on the bright side of the situation.

“This pandemic, to me personally, came as a blessing,” Benjamin said. “I would have never learned how to cook or understand the core of the restaurant like this.”

As Curry Up Now celebrates one year in business, Benjamin’s goals for the restaurant have changed. What was once hoped to be a money-making side venture has become a mission to keep the doors open. The eatery isn’t breaking even right now — though the increase in vaccinations and decrease in cases has him optimistic.

“Sooner than later, we should be able to at least survive,” Benjamin said. “And that’s my goal right now. I just want to survive.”

Benjamin is in the process of slowly stepping away and putting a team in place so he can focus more on his work as a nurse. He also has plans to open more Curry Up Now franchises, though the pandemic has slowed those ambitions.

His coworkers at the hospital initially joked that once his restaurant started making money at Curry Up Now, he would leave nursing. Even if the restaurant becomes as profitable as he hopes, Benjamin insists that will never be the case.

“As passionate as I am about Curry Up Now, so am I passionate about nursing,” Benjamin said. “It’s my greatest achievement. I’ll always be a nurse.”

Pritesh Benjamin outside the emergency room Robert Wood Johnson University Hospital in New Brunswick where he works as a nurse twice a week on top of working at his restaurant in Hoboken.

Working in a hospital during a pandemic that has killed thousands of New Jerseyans humbled Benjamin.

There were times when he was so tired from working seven days a week, from being responsible for everything at the restaurant and seeing patients dying at the hospital, that the only thing getting him through was the sound of the Beatles.

Every time a COVID-19 patient is discharged at RWJ, “Here Comes the Sun” by the iconic rock band plays over the PA system.

“You might not think so, but it creates a good feeling,” Benjamin said. “Every time they start playing, it’s like a small step toward success.”

The past year of working non-stop at the restaurant and the hospital has changed Benjamin forever. The experience made him a better nurse and a better restaurant owner, he says, humbling him and changing his outlook on life. He’s traded his Porsche for a used Dodge pickup truck because he could no longer afford it. He now values time with his family more than the money he’s made while away from them — something he feels especially now with a second child due to arrive this month.

The hardest year of Benjamin’s life, he says, has changed his perspective and attitude forever.