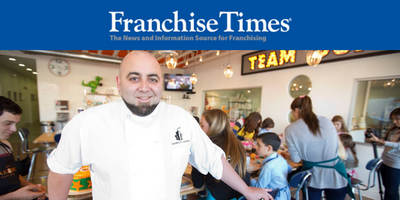 But his favorite guests are the kids, who come into Duff’s CakeMix for birthday parties. Customers purchase an already baked cake, and then choose one of 150 cards describing how to make a unicorn or a dragon or other designs, or they can select their own ingredients and create whatever they want.

Goldman is also the host of the Food Network show Kids Baking Championship. “It’s wonderful, seeing kids that are really fired up about baking,” Duffman says about the show. “When a 10-year-old puts cookies in the oven and 12 minutes later pulls them out and has perfect cookies, their sense of pride, you can read it in their face. I’m right there with them.”

At Goldman’s bakery Charm City Cakes, founded in Baltimore, “we make 10, 12 cakes a week,” and its success is one reason Goldman decided to franchise Duff’s CakeMix. “It just fills me with such pride to know that I started a business, and 20 years later it’s still here, and it’s expanded, and it’s bigger and better. I love that, and I think that by franchising you’re really helping people become entrepreneurs,” he said.

“The nice thing about CakeMix is, it’s not like a typical bakery or restaurant where there’s all these insane things that can tank your business through no fault of your own,” he said. “You don’t have to have a culinary degree, you just have to have a degree in fun.” Pamela Fazio is the brand’s first CEO and formerly the president of Kahala Brands. “I was in charge of pre-due diligence, pre-acquisition process. We were acquiring a company every nine months,” she said. “I would run that brand for about a year, and franchise it, and go on to the next.”

“I reformulated our supply chain and national partnership with Sysco Foods, which we also did for Canada,” she said. Using Goldman’s proprietary recipes, the cakes are made by an outside company, then are flash frozen and distributed to the stores by Sysco.

She enjoys her partnership with Goldman. “He’s been amazing,” she said. “If you’re watching Food Network, you think, can they really be like that all the time? But the one thing from day one I loved about him, that is really his personality. The look on their face, it’s really why he did it. He really created that for a fun environment. It’s easy to back that, right?”

Goldman returns the compliment. “She knows this stuff. She was a great find,” he said about Fazio. The cost of investment for Duff’s CakeMix ranges from $257,000 to $747,000.

Goldman’s obsession with baking dates to his first fine-dining job, in college, baking cornbread and biscuits. “It was every day for two years straight, that’s all I did. I got really good at biscuits, I got really good at cornbread. And after a while when you do the same thing over and over and over, you start to notice little things,” such as putting eggs in first inhibits the protein development in the flour, so you get a more tender cornbread.

“Weird things like that. That was fascinating to me. I wonder why this is? So I started reading about it. I asked the chef. She said, you’ve got a head for this, you should go to pastry school.” He did, and later went on to star in Ace of Cakes for 10 seasons and 115 episodes.

There he shaped cakes with drill saws and blowtorches, and built some cakes that took up to 29 hours. Favorites include a tilted Dr. Seuss-like seven-tiered wedding cake to an almost perfect replica of Wrigley Field, and many more.