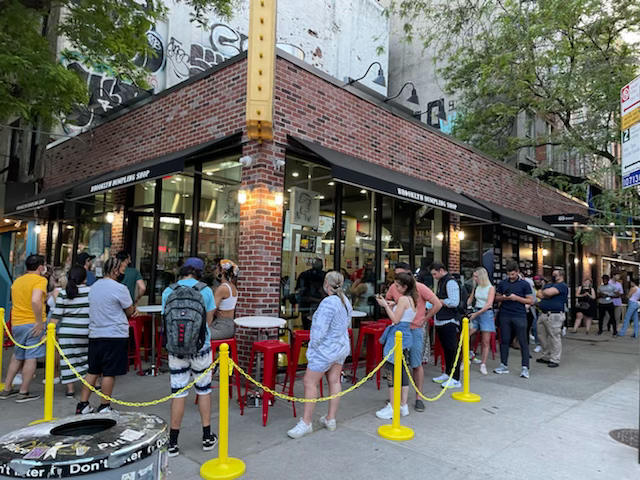 Soon, Dallas foodies will be able to try chicken parm dumplings from a machine with very minimal human interaction.

So what is automat? The 24-hour restaurant is known for its contactless ordering system, bringing back “the automat of yesteryear with the technology of today,” according to a press release.

The shop announced Tuesday it had signed its first multi-unit franchise deal to bring the brand to the South — and the first one will be in Dallas. Franchisee Sam Cole is set to open at least five units in the Dallas area.

If you’re unfamiliar with the concept, automats were vending machine-style restaurants that served cafeteria-style food throughout the early 1900s. Fast food innovation and inflation eventually made the practice impractical. What was once a popular and modern style of dining eventually all but died off.

But as the pandemic changed our appetite for indoor, contact-heavy dining, the possibilities for a once-outdated concept reemerged. Brooklyn Dumpling Shop only debuted in New York’s East Village in May 2021, but the brand has already signed franchise deals for locations throughout New York, Florida, Texas and more.

“It’s an incomparable brand — the reimagination of the automat concept is enough to get people in the door, but the high-quality and uniqueness of the dumplings is what keeps customers coming back every time,” says Dan Rowe, CEO of Fransmart, Brooklyn Dumpling Shop’s franchise development partner.

How does it work?

Once an order is ready, it’s inserted into one of the lockers. Customers are notified and can then scan their phones and pick up their food. Seems easy enough.

At the original location, dumplings were made in the kitchen by an 11,000-pound machine called “The Monster,” reported The New Yorker. Dough is inserted into the machine before it’s filled with one of many fillings and ejected through a conveyor belt.

The idea came to Morfogen pre-pandemic, driven mostly by economics and efficiency. “We call this a restaurant on training wheels,” he told the New Yorker. “It doesn’t need a chef, a cashier, or any counter people.”

‘Dumplings are the new sandwich’

The shop’s website says they turned classic diner staples, such as Reuben and pastrami sandwiches, and turned them into dumplings.

The shop has 32 different dumpling varieties currently on its online menu. The dumplings, which are sold in orders of three, come in everything from lamb gyro, bacon pepper-jack cheeseburger to peanut butter and jelly.

The shop even offers meatless Impossible burger and crispy “farmers market” eggplant options. And for dessert, you can have some Nutella or crispy apple wonton-style “drops.”

Brooklyn Dumpling is still scouting locations for its first Texas spot and has no open date set as of yet, according to a PR executive. The brand is also eyeing expansion in Austin and Houston.