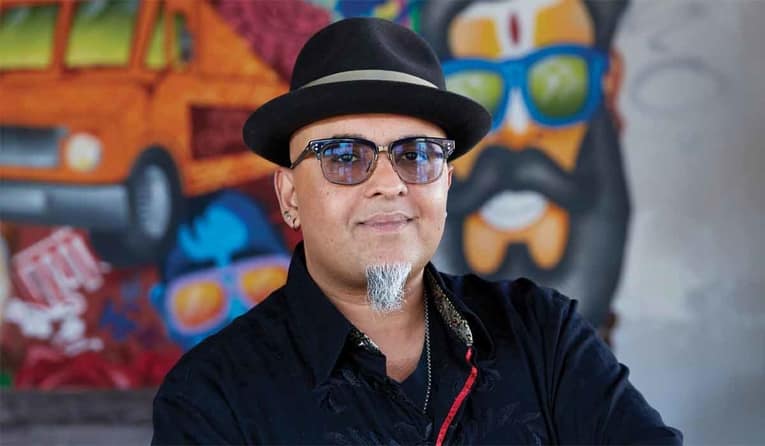 In 2009, my wife and I were at a summer barbecue with some buddies, and we came across a Time magazine, which had food trucks and Roy Choi from Kogi in it. I read the story and thought, if he could do it, we could do it. So that very night we wrote up a five-minute business plan. Two weeks later we had a truck. There were no plans for restaurants. It was just: Let’s get a food truck going. Our first time out, we had a line of 200 people, and it was like, what is going on here? We thought it was something else.

I enjoy sit-down restaurants but for a special occasion or if I’m going for the Michelin kind of experience. But that’s not a business I would own. I’m a pretty casual guy myself, and so I think it all came out of my mindset and my wife’s mindset. Our whole family—my grandparents to my parents to me and then to my kids—cooks. That’s what we do; it’s a great bonding experience.

The one thing that bugs me about Indian food and about some other cuisines as well is how they brand themselves. They make it all exotic with pink, yellow, green, and gold, and they have statues of elephants and peacocks. This is not who we are. My title at work is chief troublemaker, so I had to look at the system and say, “This is screwed up.” We’ve got to change this. And that was the premise of our burrito. That was the premise of our quesadilla, which is different from a normal quesadilla (the bread is a very traditional Indian flatbread). That was the premise of Sexy Fries, which is basically poutine, and the Naughty Naan; people call it a pizza, but it’s really not.

I love to see guests enjoy themselves. I had a group in from Utah, and there was this 7-year-old kid eating a butter chicken burrito. I said, “Hey, man, you’ve got the wrong burrito; this is not the kids’ burrito,” but he said, “Are you kidding me? I love it.” Indian food hasn’t really been people’s go-to food except maybe for Indians. So my job, my goal in life, is to turn as many people onto Indian food as I can. The challenge is to take it nationwide and then worldwide and be the biggest and baddest Indian food brand.

What was your first job?

My friends and I started a cable TV company in India during the first Gulf War. It still exists, and it’s the largest one in our city. I was back there last year and was like, wow, this is what we built.

What is your favorite menu item at Curry Up Now?

It changes from time to time, but right now I’m really enjoying the Street Snacks. I also like the Naughty Naan because it’s got those caramelized burnt onions and sliced jalapeño.

What’s the best piece of advice you think restaurant leaders should hear?

I think maintaining the status quo is the worst thing in the world. Why do I have to do what everybody else does? At least ask that question. My dad is my mentor, and he tells me this, “Think. There must be a better way.”

What are some of your interests outside the business?

I play sports a lot. I box, I play cricket, and I play tennis. I love traveling and eating food. I find suggestions from locals who are bloggers or influencers—the right people who know real food.