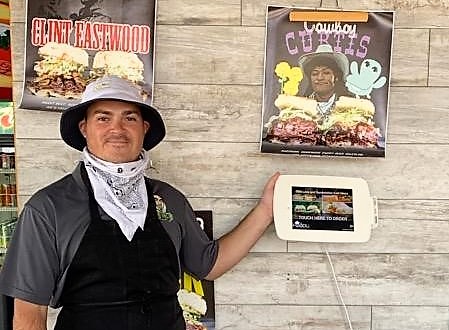 Ike Shehadeh likes feeding people and he likes to have fun. That’s what got him interested in technology shortly after launching San Francisco-based fast casual sandwich chain Ike’s Love & Sandwiches 12 years ago.

He was one of the nation’s first restaurateurs to offer a mobile ordering app, which he introduced at the  second location of his fast casual sandwich chain in 2008 at Stanford University.

In late 2017, he deployed his first self-order kiosks.

“I thought it was really cool, which is what got me interested in it,” he told Kiosk Marketplace in a phone interview. “These days people really don’t like interacting with humans.”

The Ike’s restaurants that offer kiosks have between one and three kiosks in addition to a cashier. A sign on the wall describes the five steps or using the kiosks in large letters:
1. Select for here or to go.
2. Browse the menu.
3. Modify the sandwich how you want it.
4. Pay using any major credit card.
5. Wait for your order to be called.

The self-order kiosks from Foodli, a cloud-based digital ordering platform, have been more than “cool.” They have delivered higher sales and improved accuracy and efficiency. There is always an employee on hand to make sure customers are comfortable using the kiosks, as some customers require assistance.

While Ike’s fast casual sandwich chain restaurants have been impacted by COVID-19 lockdowns in certain states, Shehadeh said sales are faring well at this point compared to 2019. So much so the company recently announced it has signed leases for three Southern California locations early this year, and expects to hit its goal of 100 locations by the end of the year.

The company now has kiosks in 10 of its 78 company-owned locations with plans to add more. Shehadeh is even considering opening some stores that have kiosks without cashiers.

“If you want a human, you can go talk to a human,” he said. “If there’s a line there, we’ll promote the kiosk.”

Kiosk use has increased since the company introduced the technology, although the level of use has not been impacted one way or another by COVID-19, Shehadeh said.

Next: A robotic beverage machine

Shehadeh is already rolling out his next innovation — a robotic machine from Botrista Technology that automatically mixes and dispenses healthy beverages. He has already installed two Botrista machines in San Diego, which he learned about through word of mouth.

Shehadeh was intrigued by the Botrista’s touchscreen ordering system that also mixes the beverage for the customer. “That’s pretty cool,” he said.

He is also excited by the variety the machine will offer. The machine can use 12 different ingredients, allowing the operator to make as many different drinks as they want using those ingredients.

“You preprogram it with the recipes that you want,” he said. “We want black tea, we want green tea, we want lemonade, we want oat milk, we want coffee, we want watermelon, and from there, we design the flavors. We can make watermelon/green tea.”

Another benefit of the system, which Botrista Technology offers on a subscription basis, is that it provides the flexibility of sourcing ingredients beyond the premixed teas, milks, juices, lemonades, coffees and numerous flavors that Botrista provides.

The Botrista machine allows an employee to serve the beverage, similar to the existing fountain drink machine that the restaurants currently use, or self-service. Shehadeh will decide which method to offer through trial and error. He believes it would be ideal to have the customer serve themselves.

“We might not do self-serve right now because I don’t know if people are going to want to touch something that some else has touched, even though we (as servers) would be doing the same thing for all intents and purposes, but at least we control it ourselves,” he said.

Shehadeh has not considered fountain self-service in the past on account of operational deficiencies he sees in most systems, such as only being able to serve one customer at a time and potential cross contamination of flavors. As a customer, he’s had to wait a long time to serve himself with such systems.

Yet there are benefits.

“It also encourages people to sample a lot of stuff,” he said.

Whether or not Shehadeh chooses to have the beverage machine server assisted, self-service and staff-assisted service will both play important roles in the company’s growth.

“We have successfully navigated through the pandemic so far with a nimble, adaptable staff,” Renae Scott, chief marketing officer, said in a prepared statement. “With updated safety protocol in stores, free delivery promotions and special sandwiches at great prices, Ike’s is positioned for continued expansion in our home state.”