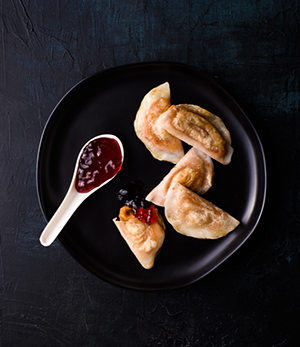 Fransmart announced it will officially represent Brooklyn Dumpling Shop, the soon-to-open, 24/7 QSR serving creative, flavor-packed dumplings with hands-free technology, in its global franchising endeavors. The restaurant’s flagship location is opening in Manhattan’s East Village this December. Fransmart was drawn to Brooklyn Dumpling Shop’s unique concept, which reimagines dumplings in 32 unique varieties along with the latest in restaurant tech innovation.

“This is all about disruption,” said Brooklyn Dumpling Shop Cofounder Stratis Morfogen. “Disrupting the QSR industry, disrupting traditional kitchen operations, disrupting traditional 30 percent payrolls and bringing back the greatest product distribution machine ever created, the Automat. We believe we’ve created the Tesla of automats, all controlled from your smartphone. I’m excited to show the world our revolutionary new [quick-service restaurant] from the 100% contactless drive-thru, to our guests’ relationship with our Automat. Grow big and grow fast. That’s the ethos of our partnership with Fransmart led by Dan Rowe.”

Brooklyn Dumpling Shop will bring the Automat of yesteryear into the 21st Century. The state-of-the-art restaurant will have a Dumpling Lab in the front window with the restaurant’s dumpling making machine for all to see. Guests will be able to place an order on their phone or via one of the restaurant’s Touchless POS kiosks. When a guest’s order is ready, the customer will receive a text notification to get their special delivery from a marked locker, which will open automatically once the customer scans their barcode. Lockers storing hot food will be red lit indicating it’s 100 degrees, chilled lockers will be blue lit and 28 degrees and auburn lit lockers will indicate one’s at room temperature. This will provide an experience that is Zero Human Interaction from start, to finish.

“I’ve never seen anything like Brooklyn Dumpling Shop. Once customers try it, they will be hooked,” says Dan Rowe, CEO of Fransmart. “This is the right concept at the right time – high volume, small footprint, tech-forward, fully co-packed menu built for speed, accuracy and incredible taste. The contactless format is the solution to the biggest problem the restaurant industry is currently facing. It is perfect for franchising and we already have prospects who want to open locations in airports and the largest malls in the country. There will be 1,000 locations across North America and in the top 25 mass gathering areas around the world.”

In partnership with Fransmart, the franchise development company responsible for the explosive growth of iconic brands like Five Guys Burgers & Fries and QDOBA Mexican Grill, Brooklyn Dumpling Shop will look for experienced multi-unit foodservice operators to develop franchise territories in top markets across the globe.