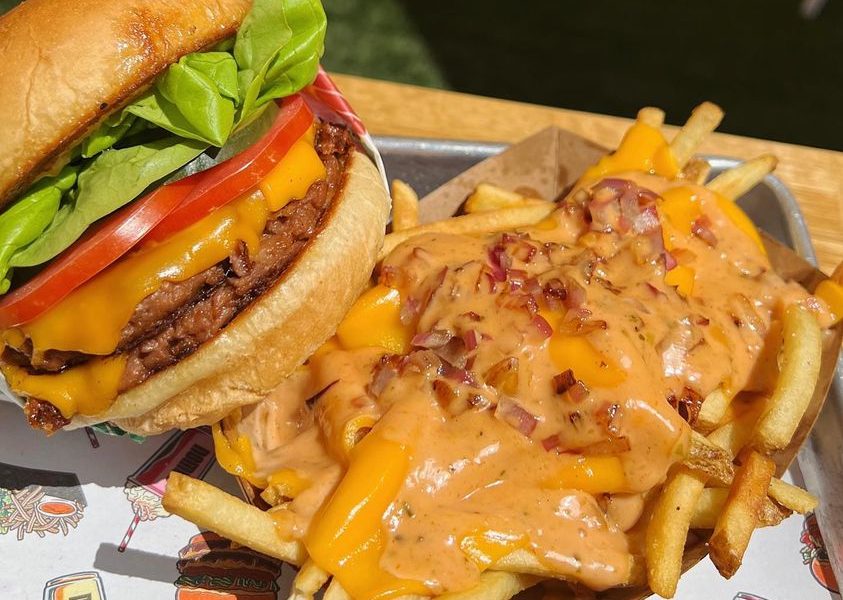 Known for growing brands such as Five Guys, QDOBA Mexican Grill, and The Halal Guys from five locations or less to nationwide recognition, Fransmart will leverage its expertise in sales and marketing to expedite Nomoo’s expansion.

“I’ve been searching for a standout plant-based restaurant concept with all the ingredients for franchise success including taste, innovation, personality, strong sales performance, and a large runway for growth,” Fransmart CEO Dan Rowe said in a statement. “Nomoo is the real deal—not just reimagining America’s favorite food with a fully plant-based spin, it has cracked the code of creating innovative comfort foods delicious enough to convert even the biggest meat lover.”

This groundbreaking partnership comes less than two years since Nomoo first opened its doors for business. Founded by George Montagu Brown, the plant-based burger joint first came to fruition after the entrepreneur grew unfulfilled with the internet business he was running while based out of Costa Rica.

Brown decided to walk away from the business he had built to pursue his dream: raising awareness about the plight of farmed animals. The entrepreneur ultimately concluded that he could utilize plant-based food to educate consumers about factory farming and prove that vegan food holds up against its animal-based counterpart.

Brown made the move from Costa Rica to Los Angeles, and soon after secured a location on Melrose previously home to the flagship Johnny Rockets (which operated for 30 years before closing in 2015). On February 28, 2020, Nomoo officially opened its doors for business—just 12 days before the World Health Organization declared COVID-19 a global pandemic.

After just seven days in operation, Brown made the difficult decision to temporarily close his new business venture. The vegan restaurant wouldn’t reopen until that June, when it was met with a series of challenges, among them serious supply shortages and delays.

“Nomoo was born from the idea that fast-food favorites can be 100 percent plant-based without sacrificing flavor,” Brown said in a statement. “Following a wildly successful first year at our flagship location, I’m intent on pioneering the shift toward better-for-you fast-food by growing Nomoo to thousands of locations across the US.”

Nomoo’s franchising efforts are the latest in a growing trend that has seen the rise and expansion of vegan fast-food chains due to the booming plant-based sector. In 2020, the vegan fast-food market was valued at $17 billion and is projected to hit $40.25 billion by 2028, according to Verified Market Research.

It’s this potential that drove the Fransmart founder to partner with Brown on Nomoo’s expansion efforts. The franchise development company points to consumers’ increased interest in sustainability and plant-based alternatives to meat, citing that 79 percent of millennials eat vegan meats, 71 percent of consumers have expressed interest in ordering plant-based foods when eating out, and 46 percent of consumers believe meat alternatives are more sustainable.

“Customers vote with their wallet, and they love this food—as you can see with the high sales,” Rowe said. “The first location already does more in sales than a Five Guys in half the space.”