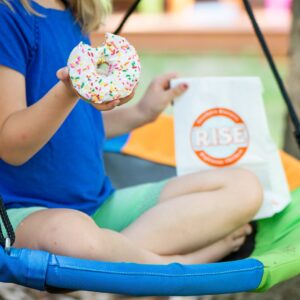 Tom Ferguson, Owner and Founder of Rise Southern Biscuits & Righteous Chicken walks us through his journey in rebranding

Every restaurateur opens their first store with a clear vision of the menu, the ambiance, and the success. But what happens when rapid success leads the brand down a different path? Owners need to be able to recognize when there is a problem and have the fortitude to follow through and fix it. This is easier said than done. How do you get back to your roots?

Culinary Institute of America trained chief, Tom Ferguson, CEO and founder of Rise Southern Biscuits and Righteous Chicken describes how he rebranded with great success. Ferguson launched Rise in November of 2012 and Fransmart, leading franchise development agency, approached him to franchise 2 short years later. Rise took off nationally but as the brand grew so did the footprint, menu, and operation costs. These are not necessarily indicators that something is amiss but for Rise it was a warning signal. According to Ferguson the signs will be different for every restaurant but, “You know when you know. That’s not the hard part. The hard part is making the commitment to tear it down and build it back up. That’s the hard part.”

The first indicators that the award-winning brand was getting farther from the original vision for Tom was “visiting the stores and seeing the product was not the same store to store. We realized we didn’t have consistency throughout the brand. And the numbers really weren’t working either.”

Ferguson recalls an old mentor of his once said “when in doubt just cook. So that’s what I did. I went and worked in the stores for 6 months to evaluate what we were doing. We changed cooking techniques, and equipment needs, and trimmed down the menu over a year period until I was comfortable with what it looked like.” Rise received more than just a logo change it was reworked into a finely tuned machine that would be consistent across all locations without losing any of its deliciousness. Ferguson didn’t just want to fix the problems at hand; he went a step further and started attending seminars, conferences, and a did a lot of research into what the future of the quick service restaurant industry would look like. Being flexible and always thinking of the “big picture” is essential to longevity and profitability.

After extensive research Ferguson and his team “realized [the future of QSR] was moving towards online orders and delivery. This was back when it was kind of scary and new. Giving away 25% of your sales to a delivery company makes it hard to make the numbers work.” Despite these hurtles Rise leaned into technology and online ordering as they knew it would be necessary for the future. “We had our 3rd party delivery orders go directly into our POS which made printing out orders very efficient. We made these changes by the end of Feb of 2020 and we were in perfect condition when the pandemic hit.”

When the pandemic was sending the restaurant industry into a tailspin Rise had the rare advantage of carefully planned and thoroughly tested online ordering and delivery systems already in place where other brands were left scrambling. “We made a few tweaks once the virus hit to our new systems. We went to kiosk only ordering in store which means no cashier. We started doing curbside. People felt really safe in our stores. They weren’t having a lot of contact with our employees.” Ferguson states “Now our sales are up from last year and profits are up. So, these are really gigantic differences that this made and really it hasn’t even been a year yet.”

It is no small feat to recreate entire systems and to ensure they are easily replicable for franchisees and maintain their profitability. Ferguson wants to be a lesson that others can learn from. He admits “Not knowing what to do but knowing you have to do something” can be taxing mentally and suggests “If you know something is wrong. If you know something is wrong with your brand, you’ve got to dive in there and fix it.”

As Ferguson began to research possible solutions he “was given some good advice from mentors that it’s all about ROI. It’s all about your return on investment.” He continued, “if you focus on that and build out you can more than likely figure out a direction. It made it easier to figure out what to focus on and make decisions. Some of the decisions that I needed to make were lines I had drawn in the sand saying I’ll never do that, but the reality is without doing that I wouldn’t be successful.” For the fellow restaurantors out there who are afraid to take the plunge of revamping their brand Tom Ferguson of Rise Southern Biscuits and Righteous Chicken is proof that embracing change is worth all of the effort.

If you are interested in becoming a Rise franchisee click here for more information or to apply!