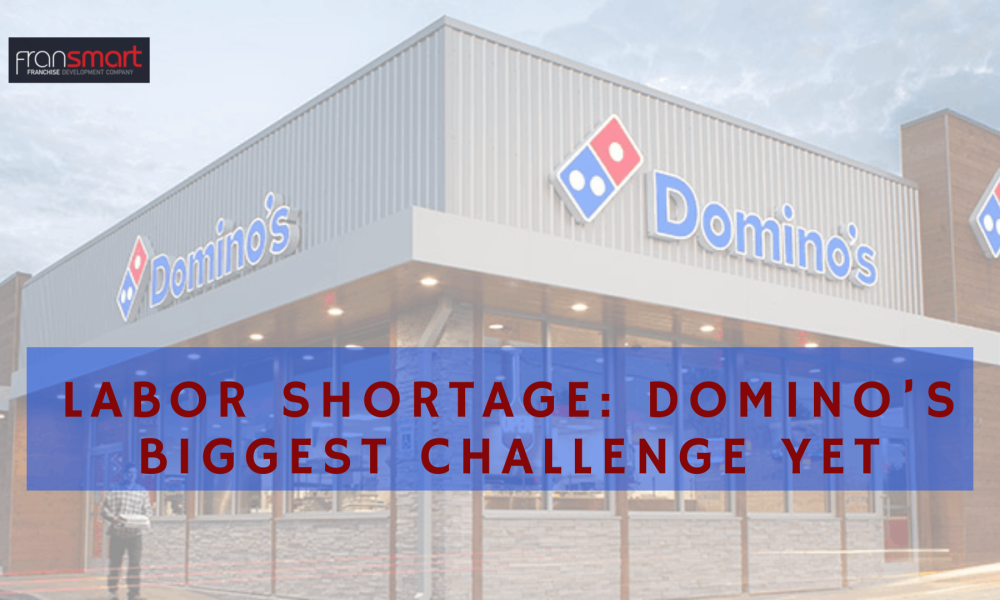 During the third quarter, Domino’s reported a nationwide labor shortage as its main challenge after posting its decline of 1.9%—a stark change from their 17.5% increase during last year’s third quarter. This ended Domino’s streak of sales growth for the first time in years.

Before the Third Quarter

Early on in the COVID-19 pandemic, Domino’s Pizza was named one of the best positioned to survive the pandemic by restaurant industry analysts Saleh and Roger Lipton.

Like other pizza chains, Domino’s experienced a boom in their business since indoor dining was a significantly smaller part of their business compared to other chains. Additionally, they had a customer base for delivery.

So, decreasing sales was not because of lower demand.

Identifying the Factors for the Decline

On a two-year growth stack, Domino’s comps saw an increase of 15.6%, which— although admittedly impressive—is still considered as a deceleration over the past two years.

Additionally, as time went on, Domino’s did not have enough workforce to keep up their earlier pace. CEO Ritch Allison further added that what the chain is mostly lacking are delivery drivers.

According to Corporate Controller and Treasurer Jessica Parrish, the decline was attributed to the shortage of workers amid the COVID-19 pandemic, resulting in challenges in the company’s customer service and reduced operating hours, which ultimately led to lower-order counts.

While Domino’s has benefited from a stimulus package—the government’s way of encouraging private sector economic activity during the recession—and improved unemployment benefits in the past, both of these waned around early September.

Rightly, Allison acknowledged the issue of labour shortage in an earnings call, saying that staffing has indeed been a challenge.

Company-run units also mostly dragged same-store sales in the US, which declined by 8.9%. Parrish attributed this to the aggressive fortressing of company units, in which fortress stores share addresses with existing locations, among other reasons.

Allison said that in their corporate store business, Domino’s is proactive about aspects such as looking at their wages, compensation for their team members, and in working across the system, introducing an applicant tracking system to assist with hiring and team member acquisition.

Furthermore, operational improvements inside of their stores are also being worked on, which will allow them to operate more smoothly and efficiently, with reduced labour for every order that goes out.

Here are how the plans he mentioned would work:

Fortunately, Domino’s has a new applicant tracking system that helps make hiring new employees easier. The company is also introducing new ways when it comes to onboarding, training, and development.

The corporate team, for their part, is working to eliminate laborious tasks—pre-folding boxes and others—inside their store.

From the inside, the chain’s new generation POS system makes managing transactions easier, which helps the new employees significantly.

Outside, equipment that reduces the labour needed for producing dough balls and managing distribution is also available at the supply chain centres.

Since it is imperative to keep drivers in their cars, running a pizza out to the driver once they pull into the lot is essential. This makes the technology behind Carside Delivery critical as well.

Allison also plans to boost the delivery channel by launching an advertisement campaign wherein Domino’s will give away a freebie for one out of every 14 digital orders, which they refer to as “surprise frees.”

It is said that $Domino’s franchisees will be handed to delivery customers 50 million worth of these “surprise frees.”

Domino’s continued to have an increasing same-store sales in the third quarter for their carryout channel, which remained their higher-profit centre. Their stores have been consistent in their two-minute guarantee.

Moreover, since carryout transactions do not require much labour, this channel will be a priority, according to Allison. Regarding this, he said that upon looking at their carryout order counts, they are still not exactly back to where they were two years ago despite experiencing good carryout same-store sales in their third quarter.

However, this remains an area they will focus on and have more opportunities to continue that part of its growth trajectory in the long run.

Considering the inflationary environment of the business, Domino’s keeps on testing price points to find the price range that would result in growth for its franchisees in the long run.

As Allison put it, they are bound to value but not exclusively be attached to any individual price products. So, if a better price point will yield better long-term beneficial growth for their franchisees, that is the direction they will take.

This consists of opening more stores, especially in locations where there is already an existing store, to hold off fees of third-party delivery services by having in-house delivery drivers.

However, fortressing contributed to the 8.9% decline, but Allison was firm that this would remain a critical part of their strategy. Because fortressing still reap positive returns, Allison said that he hadn’t seen anything yet in the quarter that would give him any sense that they should slow down.

The Future of Domino’s

According to Allison, there is still plenty of opportunities to continue opening Domino’s stores around the US. He also believes that Domino’s can hit 8,000 locations in the country.

Despite their current total of 6,471 outlets, the number of 45 net openings is still lower than he expected, but Domino’s has kept thriving even in the face of the COVID-19 pandemic. Their fortressing strategy narrows the radius of deliveries, which makes getting pizza to customers more quickly and more affordably.

As Domino’s CFO Stu Levy said, excellent service means getting as close as possible to the customer. Domino’s does that at a lower cost, allowing more deliveries and delivery drivers to make more tips. Then, they and the customer are happier, and it pushes all of that growth.”

Yes, Domino’s can meet the ever-increasing demand for convenience and speed in the world of carryout and food delivery.

Allison acknowledged that challenges, such as delays due to equipment, construction, inspections, staffing, and utility hookups, might continue. However, he also acknowledged that there is still a healthy demand among their franchise base for more unit development.

He has emphasized some of the challenges they’ll face soon when opening these stores. However, when they look at the profit, the resulting cash-on-cash returns for the chain and the four-wall profitability at the store level—the ultimate driving force behind the store’s growth—are still solid.

On the International scene

Domino’s footprint increased to 11,909, with a net of 278 units opened in the third quarter. With Domino’s 18,380 restaurants worldwide, same-store sales grew 8.8%, which extended its streak of positive momentum to a total of 111 quarters.

In the third quarter alone, Domino’s earned a total revenue of $998 million and gained an increased net income of 21.3% compared to last year.