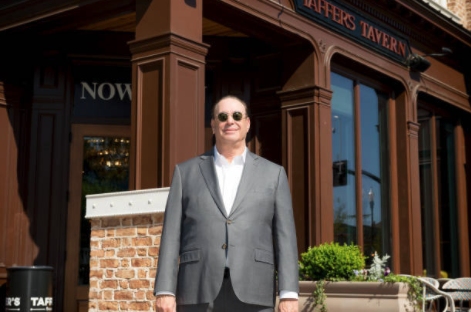 When Jon Taffer opened his first Taffer’s Tavern in downtown Alpharetta six months ago, he wasn’t able to come by for any official opening because he was shooting Paramount Network’s “Bar Rescue” in Las Vegas. The pandemic also didn’t make ceremonial gatherings all that enticing last fall.

But now, with spring upon us, he was able to carve out time to swing by earlier this week, grab over-sized prop scissors and host a ribbon-cutting with staff, local first responders and Alpharetta city officials including mayor Jim Gilvin.

Taffer was in great spirits. He was fully vaccinated and greeted staff and customers with joy. He said business has been strong, even ahead of budget, despite the fact they opened two months late in the middle of a pandemic.

The entire business model was created before the pandemic when there was a restaurant employee shortage and he invested in high-tech equipment in the kitchen that eliminated traditional grilling techniques. He said many of the pandemic-related cleanliness protocols will remain even after it’s over.

The restaurant’s most popular dishes so far, he said, are the 72-hour short rib, a roast beef au jus and much to his surprise, the grilled chicken avocado sandwich. And he said “Bar Rescue” fans are enjoying cocktails created on the show and thanks to an open-container law, some customers will buy them on the patio and sit elsewhere in the vicinity.

Taffer is looking to open a second Taffer’s in metro Atlanta but hasn’t finalized the location. He is also planning one in Boston.

His next season of “Bar Rescue” starts May 2 and instead of traveling, he stayed in his current home of Las Vegas and tries to resurrect bars that suffered immensely during the pandemic. He said it was a very emotional season.