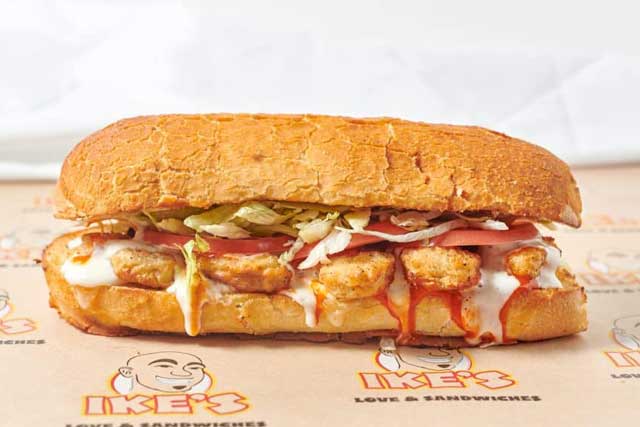 Ike’s Love and Sandwiches has officially made its Colorado debut after opening the doors to its all-new Denver location. As the first of at least five Ike’s restaurants set to open in the greater Denver area, the Central Park storefront was handpicked by father-daughter duo Blair and Camille Woodfield of Woodfield Squared, LLC.

Located at 8300 E. 36th Avenue in the neighborhood formerly known as Stapleton, the Ike’s store opened ahead of schedule, before the new year, in December 2021. The Woodfields have enjoyed tremendous success in the location’s first few months and are enthusiastic about the prospects of growing the Ike’s brand throughout the Mile High City.

“It’s exciting to be the first to bring the Ike’s concept into Colorado,” Blair says. “To be successful in the Denver area, we know we have to bring creativity to the table, and we believe that Ike’s innovative offerings and unique flavor pairings will really resonate with the community and throughout the state.”

“Camille and I are true partners,” says Blair. “We’ve always had a great connection and shared a vision for success. It’s a privilege that I’m able to go on this franchising journey alongside my daughter.”

Founded by Ike Shehadeh in 2007, Ike’s Love & Sandwiches currently has over 80 locations in operation throughout California, Arizona, Nevada and Texas, with additional locations currently under development in Utah, California and Nevada. Ike’s is expecting more than 30% growth in 2022. The brand continues to see explosive growth as it builds a dedicated, loyal following and brings its famous menu and pop culture-inspired sandwich selections to customers from coast-to-coast.

The concept is a sandwich lover’s paradise, offering over 700 deliciously addicting sandwiches – including vegan, vegetarian and gluten-free options – all spread with “Ike’s Dirty Sauce,” baked directly into the bread. Beyond the extensive and flavorful menu offerings, Ike’s follows a proven business model with low build-out costs, efficient labor practices and waste-reducing operational standards – positioning the concept for rapid franchise development.

“Above all else, love, appreciation and respect serve as the foundation for everything we do at Ike’s Love & Sandwiches,” adds Shehadeh. “Blair and Camille have a special connection and it’s been wonderful to see the early success they’ve had here in Denver.”

In partnership with Fransmart, the franchise development company responsible for the explosive growth of iconic brands like Five Guys Burgers & Fries and QDOBA Mexican Grill, Ike’s Love & Sandwiches continues to grow rapidly and is on track to reach the 100-unit milestone by the end of the year.

The brand is currently seeking experienced franchisees to continue bringing the concept to the top 40 media markets throughout North America. Franchisees receive training and support from start to finish, from site selection expertise to custom training systems and localized brand building.