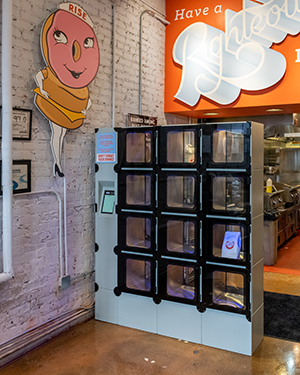 Food lockers have boomed in popularity during the pandemic as a contactless way for customers to collect food.

Chains including KFC, Burger King, and Smashburger have all announced plans to bring food lockers to their restaurants.

The trend has been around for way longer than the pandemic, and isn’t just being used by restaurants.

Food lockers, in their most basic sense, are devices that are used to store food, often for customers to collect. In this way, they’re a little like the Amazon Lockers located in neighborhoods, apartment blocks, and inside stores.

The lockers vary in size, and they can be different temperatures, too. Some are heated, while others are chilled, to keep food at the right temperature until customers can collect them. More high-tech models even use UV light to kill bacteria.

Fast food restaurants have rolled out food lockers during the pandemic

Though some restaurant chains already had them in the works pre-pandemic, many have pivoted to food lockers over the past year, as they focus on new methods for delivery and collection.

Customers can order food in advance online or via the restaurant’s app and then pick it up from the locker.

Food delivery drivers can also use the lockers to collect orders.

Restaurants are experimenting with different ways for customers to unlock the lockers. In some cases, the lockers have a pinpad or touch screen. Customers need to enter a code sent to them when they placed their order. Other lockers can be opened by scanning a QR code or even by replying to a text message.

Food lockers can also help facilitate in-store social distancing during the pandemic. They remove the need for customers to interact with restaurant staff when it’s not necessary. Many restaurants also let customers select a collection time when they place their order, which reduces the amount of time they spend waiting in the restaurant and the number of customers waiting there at the same time.

Burger King and Smashburger are rolling out new-look restaurants with food lockers this year.

KFC trialed food lockers at four restaurants in Japan in October, and it also uses similar lockers at its dubbed “restaurant of the future” in Moscow. The automated store, which involves minimum human contact, uses conveyor belts and robots to put food orders in lockers at the front of the store.

Customers retrieve their food using a code, and can pay either by card or using a biometric facial recognition system.

North Carolina-based chain Rise Southern Biscuits & Righteous Chicken is rolling out heated food lockers in some of its stores, too. The lockers are stacked on top of one another with individual heating systems.

“We just want people to feel safe, regardless of how they perceive the virus,” Rise CEO, Tom Ferguson Jr., told Insider. “Not only do the food lockers provide a contactless transaction, they also add convenience. The biggest plus for us at Rise is it’s freed us to focus on the culture in our kitchen that makes running a restaurant worth it.”

Though the trend has been accelerated by the demand for contact-free collection, food lockers aren’t a new phenomenon. Some fast food outlets were considering them before the pandemic.

Back in November 2018, Dunkin’ said it was testing pickup lockers at its innovation lab. After placing an order for pickup on the Dunkin’ app, users would simply go to the lockers, scan a QR code, grab their order, and go. Dunkin’ said it envisioned locating the lockers in busy stores in cities like New York, so that customers on-the-go wouldn’t have to wait on any lines.

Wingstop said in January 2019 it was looking to introduce the lockers to cut labor costs, noting that 75% of its business was collection.

Before restaurants started using them for customer pickup, automats were already using rows of food lockers to sell hot food. The world’s first automat was opened in Berlin in 1895, though it looked very different to modern ones.

With a notable presence in countries including Spain, the Netherlands, and Japan, automats are like self-service vending machines where customers insert coins or use their card to buy hot food.

Individual food lockers sit on top of each other and are lined up in rows. Staff top them up throughout the day.

Horn and Hardart opened the US’ first automat in Philadelphia 1902 and went on to dominate the industry in the US: By the 1950s, the company operated almost 50 automats in Philadelphia and more than 100 in New York.

The popularity of automats has since dwindled in the US, and Horn and Hardart’s last NYC site closed in 1991. As software and hardware progressed, San Francisco chain Eatsa developed a chain of more high-tech alternatives, but it closed its doors in July 2019, too.

The pandemic, however, is giving automats a new lease of life. Some companies are trying to innovate beyond the traditional automat models, and “the time certainly seems right,” according to Tim Sanford, editor of trade publication Vending Times.

While automats typically sell pre-made food, a new automat restaurant opened in New Jersey in 2021 that makes food to order. Automat Kitchen has a patented ordering and pick-up system that delivers items to customers through a wall of lockable LCD boxes.

Customers order in advance via its website and get texted a code when the order is ready. Rather than enter this code into the locker, they can also reply to the text message to open the locker – making it an entirely touch-free experience.

The Brooklyn Dumpling Shop is rolling out new-look automats, too. Its 24-hour locations, set to open in the spring, will let customers control their orders using their phone. The sites will range in size from 500 square feet to 1,000 square feet, and the lockers light up in blue for chilled items, and red for hot to-go orders.