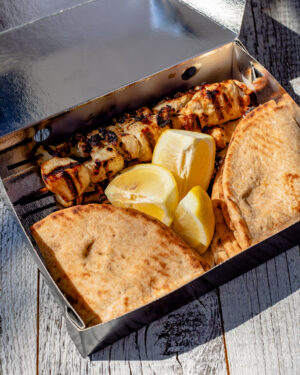 The Saint Nicholas Greek Orthodox Church, grandly situated alongside Northern Boulevard in Bayside, Queens, orchestrated some of the greatest festivals a teen could attend.  Many of my friends were Greek, and young and hungry, we’d  planned ahead  for these events with a lot of thought put into what we’d wear to attract the cutest boys, and what we’d eat when they weren’t watching. How could we smile coquettishly at our potential “Adonis” if spinach was stuck between our teeth?

So we had to work together. Devise a plan. Buy a plateful of Spanakopita (spinach pies) or Tiropita (cheese pies) and stealthily eat them somewhere geographically conducive  to pulling small mirrors from our purses.  And when we’d  leave at the end of the day,  we always had to have at least one jacket or sweater under which we could hold a large bagful of Loukoumades – cinnamon-sprinkled, fried balls of dough decadently doused    in honey. It wasn’t easy to exit gracefully while holding a paper bag evidencing oily, cinnamon-dusted fingerprints.

To be honest, when my sister-in-law, Deb, suggested that we meet for lunch at “Greek Xpress” in East Rockaway today, I was a little hesitant. My home is closer to the nearly year-old eatery than hers, and I’m not quite feeling like “bringing in” food. But she says that she’s already been to this Main Street location a few times before, and it’s a table restaurant just like any other.  That sounds perfect to me!  I’m  looking forward to it, as   I love that greatly incorporated into authentic Greek, Mediterranean cuisine, are lots of flavorful and fragrant herbs and spices, most notably, oregano, thyme, garlic, basil, and onion. Olives and olive oil are also common to many Greek dishes – having long been a significant part of Greece’s agriculture – and history. It’s been written that in ancient Greece, kings and decorated athletes were anointed with it. Another interesting accreditation to historic Greece: it’s believed that the first “cookbook” ever (some resources suggest it was more of a where-to-go for the finest foods and how to prepare them) was written in the 4th century B.C., when a poet by the name of Archestratus, authored “Hedypatheia” (“Pleasant Living”, or, “Life of Luxury”). With such an enriching background dating back to ancient history, one would expect Greek foods to be prepared with incredible attention paid to detail.

Any preconceived notions I had about what the word “Xpress” might imply, are quickly dispelled once inside the large dining area, brightly inviting with its crisp orange and white colors and décor. I’m seated  on a white banquette that runs the full length of the room, opposite an exposed brick, painted white wall, on which three pictures of picturesque-Greece are hung. A glass-topped, white table, separates me from Deb, who’s seated on a sleek, orange chair. Above us is a gorgeous sky-painted ceiling that’s dimensionally accented by wide, white molding.

Deb introduces me to one of the owners, Jimmy, who has a tremendously warm disposition. He immediately sits down with us, telling us a little about Greek Xpress, the established success it’s already had in other locations, and his desire to have the local communities learn more about this, what’s one of their newest. He and his business partner, Alex, are both Greek, their families hailing from Sparti and Tripoli.  The  recipes  utilized  in the restaurant are pure nods to their heritage; each one completely original, based on family tradition, and having undergone rigorous family taste-testing approval. There’s zero compromise in many aspects of their company philosophy for success. Chicken, for example, is on the average, some 60% more expensive than other types. It’s treated just as specially, marinated to perfection. Take- out containers are ordered directly from Greece, notwithstanding their costliness, as they’re insulated in aluminum; this ensures that carry-out orders or deliveries containing foods intended to be eaten while hot, are.

We begin with the “Three Dip Combo” of Tzatziki, Hummus, and Spicy Feta Spread. Though normally served with regular, toasted pita, Deb and I are also treated to  a sampling of homemade, Whole Wheat, and Gluten-free pitas. All are warm, are flavorful enough to be eaten without a  dip, but especially delicious with any  of  the three types. The Tzatziki, is the most delicious either of us has ever had. Rich and creamy, Greek Xpress produces this delectable, yogurt and cucumber  recipe  by taking considerable time to first ridding the cucumbers of all of their water through a wine press. The result is exceptional – and the Tzatziki, in turn, is favored as a companion for many of the items featured throughout the menu.  The Hummus too, is carefully (and classically) made from delicately ground chick peas and spices, while the Spicy  Feta  Spread  is  just  that  – a more puréed version of the cheese so integral to Greek fare, only with a sharp, zesty kick.

Our server, Vanessa, gives us an idea of some of the dishes that Jimmy is having prepared for us. I have a craving for Greek Salad, and Debra asks that ours is please prepared “traditionally”, which in laymen’s terms, means sans lettuce. There’s really no need for it, as the bowlful of ripe tomato and cucumber wedges tossed with Kalamata olives (who’s ever had a Greek salad without a good number of fruity-flavored, deep purple Kalamata?), thinly sliced red onion, and crowning of  a  generous,  triangular slice of feta cheese, is hearty enough. A flavorful, homemade, vinaigrette dressing, complements the fresh“salad”perfectly. And a side plateful of cold “Greek Grape Leaves”, (stuffed grape leaves), are incredible. Served over shredded lettuce tossed with light olive oil, each piece is thick, each folded leaf full of rice and fresh herbs, accentuated by lemon. Hands-down, these are the best I’ve ever eaten, anywhere.

Next, we sample two of the soups that Greek Xpress often offers as their “Soups of the day”; Chicken Lemon and Rice, and Lentil, both delicious – and unique to my palate. The first, has a lovely, lemony flavoring, the chicken and rice, soft and amply portioned. It’s explained to us that the incorporation  of some egg, gives the soup its  coloring.  The Lentil, by comparison, is more robust,    a blend of many full flavors. Deb and I also share a number of “Starters & Appetizers”, including golden-brown, liberally sized “Zucchini Fritters” and “Falafel Balls” that we dip in the Tzatziki we’ve already established we love, “Grilled Vegetables”, Greek-styled and deliciously prepared with EVOO (extra virgin olive oil) – and “Charbroiled Octopus”, huge, soft-like-butter, (something like 8”!) legs, tenderly grilled with a vinegar type oil and seasoned with herbs.

After a breather, we’re next presented with “Greek Spinach Pie(s)” that are  “classic”  only in that they’re puff pastries baked in phyllo. Unlike the large,  triangular  forms, or large, rectangular pieces served in most restaurants, here, what are also commonly known as “Spanakopita”, are pastries where their layers and layers of phyllo dough must have begun cut into squares, and then folded inwards until their corners could meet in the middle. No doubt, the pies  were just made, and just taken, from the oven; the outside phyllo layer is golden, but the interior layers are literally doughy, the velvety fresh spinach and feta mixture inside, piping hot. Before they can even cool a bit, Vanessa presents us with “Greek Moussaka”

– so insanely hot, it’s just  beginning  to  “set”, much like a lasagna does before it’s sliced. This ethnically prepared dish has an eggplant and potato base, then layered with saucy chopped meat and dreamy Béchamel, (a white sauce of whisked hot milk, butter and flour that requires a watchful eye so as to achieve the just-right consistency), and finished with touches of mozzarella on top. Accompanying the Moussaka are lengthy, slightly-crisped wedges of oven-roasted lemon-flavored  potatoes. The combination of all of the full-bodied flavors of this meal, is delectable. And lastly, Deb and I share a plate with tastings of grilled bites of Greek sausage (made with slivers  of  orange  peel), chicken (of that expensive  variety,  so lovingly marinated), pork souvlaki, and Bifteki – Greek style chopped meat – that has been formed into a burger-like patty. Lemon wedges serve as juicy companions.

The desserts featured at Greek Xpress are meals in themselves. I’m not kidding. The Baklava, for example, is very intense and probably a dessert that requires an acquired taste because of its textures and sweetness; layers and layers – and more layers, of phyllo, encase chopped nuts, and the  decadence of a syrupy honey. It’s so rich, Deb and I can only eat a few small bites before finding room to sample the Galaktoboureko, a sweet, rich, slightly lemon-accented custard type of dessert, dressed atop, and below, by layers of golden phyllo. And last, we share Greek Xpress’s Rice Pudding, which we find, is not for the faint of heart. Each spoonful holds a creamy mixture of sweet, firm rice (with a consistency similar to risotto) with faint notes of Mastic – a flavoring I’d liken to licorice, and cinnamon aplenty.

How do I loosen leggings?

There are some things you just shouldn’t try at home. Not unless you really have the potential to succeed. Take, for example, my experience in December of 1998, when I’d stood at the small countertop of my micro- sized kitchen, attempting to make a very dietetic version of Moussaka. It’d been a few weeks after my husband (shhhhh… I’d been a bad girl; he’d only been my boyfriend at the time) and I had moved in together, but much more importantly, just before  the New Year. I’d been making every effort to bill myself as the perfect homemaking, potential wife, gunning for a New Year’s Eve proposal, so with an eye towards touching his heart through his stomach, my kitchen had seen a lot of action. But I’ll readily admit now, that my Moussaka-attempt then, had been horrendously ill-fated from the start. I’d tried replacing every part of what makes Moussaka as rich as it should be, with everything ridiculously low-fat – from ground turkey in ground meat’s stead, to whipped hot, skim milk and a butter “substitute”, in place of Béchamel. The  meal turned out a certifiable calamity, and  I didn’t see a ring until January 20th. I think it’d taken him until then to recover from the meal.

Yeah. It’s almost two decades later, and these days I mostly stick to recipes I’ve mastered – I’m going to leave my family’s cravings for Greek cuisine to Greek Xpress. It’s high-end, affordable food,  with  a  menu versatile enough to find something everyone can enjoy.