Franchises to Watch in 2021 – Greek Xpress 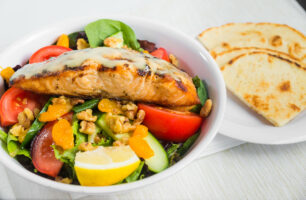 The question has nagged at many restaurateurs who weigh the costs and benefits of aligning with a regional or national brand.

Operating independently means total freedom, unrestricted creativity, growth at your own pace, and a larger potential upside if and when you sell. Franchise brands, on the other hand, offer plug-and-play systems, marketing support, and a customer base that knows and loves the product. Before the nightmare of 2020, many independents wouldn’t have touched a franchise with a 10-foot skewer. But uncertainty in the industry has made established brands more appealing to both food-service newbies and veterans.

In fact, Restaurant Business reported recently that 2021 is shaping up as the strongest year ever in restaurant franchising. “A host of factors are setting the coming year up to be one of the best in the business model’s history,” Restaurant Business said. “Favorable real estate, strong performances in some sectors of the restaurant industry, a high number of suddenly unemployed restaurant workers, and low interest rates could all drive franchise sales next year to their highest seen in ages.”

When you’re with a franchise, “you have an army behind you,” Dan Rowe, CEO of franchise-development leader Fransmart, tells Estiator. “Franchises are a business of systems, processes, best practices, and a collective peer group that are all in it together. Look how important off-premise was during Covid—chains quickly pivoted, they had better buying power with the delivery companies for better deals, they had better buying power with their food delivery companies for more flexible terms. Independents are just that—by themselves.”

According to a 2020 report from the International Franchise Association, quick-service franchise restaurants are projected to generate nearly $283 billion in revenue this year; full-service restaurant franchises are expected to produce more than $80 billion. And as a whole, “franchise businesses’ economic output is expected to grow faster than the economy as a whole,” the report said.

A Greek franchise has yet to truly break out on a national scale—there’s no Greek McDonald’s or Pizza Hut—though several have become regional powerhouses. This may be the decade that finally changes, however. Our cuisine lends itself naturally to broad consumer tastes. It travels well. It’s synonymous with healthful eating; and, critically, Americans have become much more familiar and less intimidated by more diverse foods over the years.

Which are the Greek franchises to watch in 2021? Estiator rounded up some brands to know if you’re considering a leap into this business model. And even if you’re not, you might pick up a trick or two from the ways they do business.

Greek Xpress is a newcomer to franchising. Founded by CEO Jimmy Soursos and “a group of Greek-American friends who missed the authentic food we ate in Greece,” the brand grew to seven locations before teaming with franchise-development leader Fransmart on a national expansion. “In the next few months, we expect to finalize our franchise requirements and will commence supporting our franchisees in the opening of their locations throughout the world,” Soursos tells Estiator. “We are initially forecasting around 200 locations within the next five years, yet we will work hard to overachieve that number.”

For Soursos, the expansion is a classic right-idea-right-time opportunity. “With the unfortunate challenge that Covid-19 has brought to the world, there has never been a better time to reevaluate your health and what you put in your body to help support a better immune system,” he says. “In my opinion, Greek food is the world’s most beloved and healthiest cuisine. The menu features a wide range of vegetarian, gluten-free, and high-quality protein options that customers seem to love.”

As an independent himself who’s transitioning to a franchise model, Soursos says an established brand “brings less risk to the table. I sincerely believe that Covid-19 has rein-forced the power of franchising and the resiliency it brings through up and down economies,” he says. “I believe this so much that when I founded Greek Xpress, I kept myself accountable while playing both roles—the founder of a concept that I wanted to franchise and the operator of Greek Xpress restaurants who essentially were acting and behaving as a franchisee.”

And despite the fact that he’s launching the Greek Xpress franchise during a pandemic—or maybe because of it—Soursos sees enormous opportunity. “The future is bright for everyone, and especially so for the quick-serve, fresh-to-order segment,” he says. “The customer base opportunity is huge from employees taking a lunch break, to catering business lunches and meetings, to feeding the hardworking world at dinner time when quality time is limited but a healthy meal is deserved. I could not be more excited about what is ahead for all of us.”

Greek Xpress franchise requirements: According to a spokesperson, the company is expecting to launch its franchise program this summer, and will unveil franchisee requirements then.