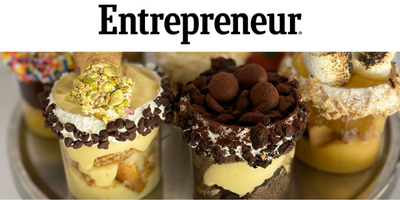 Chef Fabio Viviani has solidified his spot among the hospitality elite.

He moved from his native country of Italy to the United States in 2005. Within a year, he was voted “Fan Favorite” on Top Chef, a competitive reality television show that formerly aired on Bravo. His personality and obvious cooking talents

landed the famous chef more television appearances, including a repeat appearance on Top Chef All-Stars, and catapulted him into becoming a celebrity chef and titan in the restaurant industry.

“We are trying to be at the forefront with our business,” Chef Fabio Viviani said on the Restaurant Influencers podcast hosted by Shawn P. Walchef of CaliBBQ Media. “A better way of doing hospitality. Better way to take care of your people. Better ways to build culture. Better way to open a franchise. You’ve got to find a new way.”

Accomplishing amazing feats is somewhat of a norm for Chef Viviani. Prior to winning the hearts of the American public, Viviani cut his teeth working as a youth in restaurants in Florence. By 16, he worked his way into becoming sous chef of the vaunted Il Pallaio without formal culinary training.

Outside of his illustrious career in the kitchen and opening restaurants, Viviani is also a best-selling author with cookbooks Cafe Firenze Cookbook: Food and Drink Recipes from the Tuscan Sons and Fabio’s Italian Kitchen being published in 2009 and 2013, respectively, with the second reaching the New York Times best seller list. His most recent cookbook, Fabio’s 30-Minute Italian: Over 100 Fabulous, Quick and Easy Recipes, was published in 2017.

Along with providing an array of events and hospitality consulting, his company has over 30 restaurants under its current umbrella. Viviani’s life, however, has been one of extreme ambition. That remains the case as Viviani revealed his plans to open 1000 restaurants by 2030.

History tells us that there is a great chance that this vision will come to fruition. One thing is for sure, if you remind Viviani of all he has accomplished, he will smile and reply “We haven’t even started.”

Takeaways from this episode:

Goal #1: Build Culture — Fabio Viviani is a mogul in the hospitality space. He believes there is no possible way for his company to have flourished without first building an amazing culture.

Find a System. Check the System — Creating a culture is fine. Fabio Viviani believes that the system created within the culture, and the ability to ensure that system is adhered to, is the ultimate key to business success.

The Vision Creates the Path — As his level of success increased, Fabio Viviani’s goals have adjusted to match. What he has found to be most important to his journey has been his consistent vision.