Brooklyn Dumpling Shop to expand beyond NYC, planning 125 units in next two years 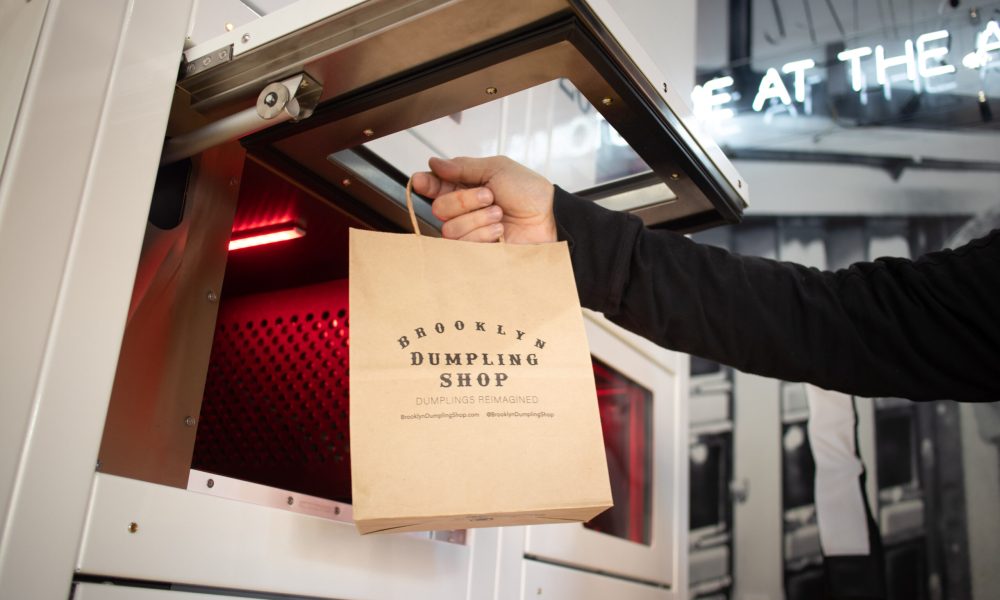 The restaurant chain stands out from competitors because of its automat format that requires very few employees, small square footage and little startup money.

While it may be in line with consumers’ current habits, Brooklyn Dumpling Shop was developed to serve the consumer of the future and the way habits had been slowly moving before the pandemic. The technology was in development before the COVID pandemic and the further shift to contactless ordering and payment.

Each roughly 700-square-foot location receives frozen dumplings from the warehouse on a daily basis and flash cooks them as customers place an order. The restaurant then sends the dumplings to the lockers for scannable pick-up. Some orders can have a customer in and out in under 30 seconds if they place the order ahead of time, according to Morfogen.

But since its inception, Morfogen and his team have developed other formats for Brooklyn Dumpling Shop, including a 150-square-foot kiosk and a five-lane drive-thru, which are renderings available as options to franchisees. If developed, these formats will operate without human contact.

Using their phones as remote controls, customers at the drive-thru will pull up to one of five lanes and place their orders on their phones. They will see a green light when their order has been processed and they will move to the next station and scan their barcode. The automatic locker containing their order will open with the customer’s meal.

As for people who suggest technology could be stealing jobs, Morfogen has an answer for that.

“I’m saving jobs,” he said. “Here are the facts. Seven out of 10 restaurants fail within three years. Number one reason is excessive payroll then undercapitalization and high rent. If we can turn around and drop the industry norm for payroll from 30% down to 15%, where instead of a staff of 11 or 10 people, you’re doing this with four or five staffers, you’re saving jobs [in the long run].”

That’s not even addressing the current labor crisis, during which Morfogen says “no one wants to do these hard labor jobs anyways.”

Morfogen says he couldn’t run his business his small number of employees.

“I believe technology will save jobs in the long run, not for individual units, not just being close minded. It’s not the individual units I’m concerned about, it’s the whole industry,” he said.

With this labor model, employee payroll comes from approximately 12-14% of revenue.

But the food matters too, and the portable nature along with the flavors keep diners coming back.

There are 32 dumplings on the menu at Brooklyn Dumpling House currently, with flavors ranging from Reuben, to Peanut Butter and Jelly, to French Onion Soup, to Lamb Gyro. The global flavors offer every type of cuisine to diners

“The rapid expansion Brooklyn Dumpling Shop has seen in just one year is not only indicative of the attractiveness of the brand but also the success of it,” said Dan Rowe, CEO of Fransmart, in a statement. “Interested franchisees should act now before all of the hottest territories across the country are secured.”