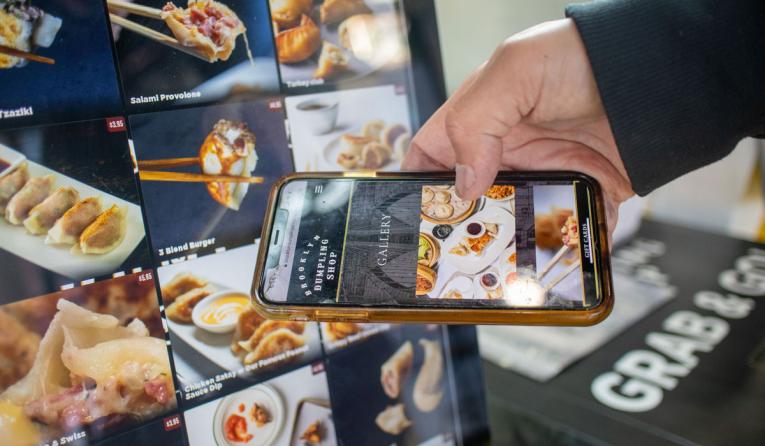 Stratis Morfogen is often accused of taking away jobs. As the owner of Brooklyn Dumpling Shop, an innovative automat concept that dispenses dumplings with flavors like Reuben, lamb gyro, and bacon pepper-jack cheeseburger, he can cut an average quick-service restaurant’s labor from 11 to four employees while still serving between 400–500 customers per day.

When confronted by critics who inevitably want to bring up his job cuts, Morfogen says the opposite: “No, I’m saving jobs.”

Critics do not grasp the full story, Morfogen, who is also the restaurateur behind Brooklyn Chop House, says. Data shows around seven out of 10 restaurants fail within 30 months. The No. 1 reason, pre-COVID, Morfogen says, was excessive payroll. With his technology, he says payroll can get from its average of 30 percent down to 15 percent.

“If seven out of 10 restaurants fail within 30 months, you do the math and see how many jobs are lost,” Morfogen says. “Don’t just think about the seven jobs per store. Think about the vendors. Think about all the trickle-down economics, where the vendors, the Uber drivers, everybody loses their job.”

And as a recent, broad exodus of restaurant employees and a continuing labor shortage show, Americans might not be as accepting of low-paying, hard-labor jobs anymore.

That’s why the Brooklyn Dumpling Shop opened at a perfect time, Morfogen says. As a zero-human interaction 24-hour quick-service restaurant, where customers can pick up their dumplings in a state-of-the-art temperature-controlled food locker, it almost seems Brooklyn Dumpling Shop was designed for contactless times. Granted, Morfogen actually created his version of the automat a few years earlier, a rendition that he compares to turning a Model T into a Tesla.

Brooklyn Dumpling Shop’s technology satisfied a sudden need for heightened safety. The only thing Morfogen changed about the automat when the pandemic hit was adding UV light.

“There’s a lot of silver linings with pain and struggle,” Morfogen says of his concept’s opening during a pandemic.

With so many empty stores available from restaurants that were forced to close, Brooklyn Dumpling Shop targeted favorable real estate deals. And this translated to greater investments for franchisees.

This timing is perhaps why the chain already secured agreements for more than 34 units throughout New York, New Jersey, Connecticut, Texas, and Florida. Most recently, Brooklyn Dumpling Shop announced it would bring five units to the Dallas area.

With so many empty stores available from restaurants that were forced to close, Brooklyn Dumpling Shop targeted favorable real estate deals. And this translated to greater investments for franchisees.

This timing is perhaps why the chain already secured agreements for more than 34 units throughout New York, New Jersey, Connecticut, Texas, and Florida. Most recently, Brooklyn Dumpling Shop announced it would bring five units to the Dallas area.

And this is just the beginning for the dumpling vending machine concept, Morfogen says. It’s set a high-level target of 500 units within five years as it looks for experienced operators and investors.

“What’s great about this model, it’s so easy to run,” Morfogen says. “It’s like a restaurant on training wheels.”

Operators don’t need chefs or cashiers. The dumplings are directly shipped and require minimal preparation. In an industry where margins are tight and everything has to go perfectly, the low labor costs can be a life saver, especially right now. Morfogen imagines the automat could have a role even within fine-dining restaurants to ease efficiency for staff and delivery drivers.

“Food service and atmosphere, you lose one of those elements, you will fail,” Morfogen says. “We’re the only industry where we have to bat a thousand to succeed.”

Most employees will make roughly $20 per hour. And the easy accessibility for franchisees presents an added benefit as well.

“That’s the beauty of this thing,” Morfogen says. “A smaller workforce, but they’re getting paid more. And the chances of any of my franchisees failing for a store that’s just not hitting the numbers is almost non-existent if they follow our model.”

Brooklyn Dumpling Shop’s expansion into the South was natural for a brand that hopes to become global. Morfogen says he is already in discussion with five other countries—Germany, Switzerland, Italy, France, and Singapore. Whether Brooklyn Dumpling Shop’s future remains franchise-heavy remains unknown. Right now, Morfogen says, he has five leases in New York that he’s considering keeping corporate or handing over to the right partner.