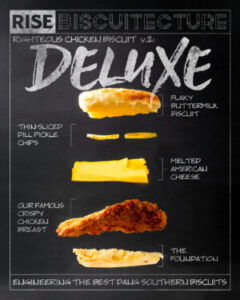 Before Fred Fordin was a Rise Southern Biscuits and Righteous Chicken franchisee, he was a loyal customer.

“We’ve always found that their food was consistently good, better than most,” he said.

Fordin opened Rise in Germantown in 2018. He’s currently looking to open more in the area, with a total of 15 across Tennessee over the next five years.

Fordin is in automotive software and was looking for a franchise to invest in. He found that Rise’s return on investment was optimal. He’s based in North Carolina and was looking at Florida. But the region he was interested in was already spoken for. So, he refocused his efforts on Tennessee.

“I thought, it’s really a Southern breakfast food concept, so maybe the wiser move for me at the time was to stay in more of a Southern market. Nobody had opened in Tennessee yet,” he said.

The areas he’s considering for the newest locations are East Memphis, Midtown, and Collierville. He’s also thinking about something in DeSoto County in Mississippi.

Fordin said he likes to be in a highly visible spot, such as the Saddle Creek location. That’s what he calls a “good corner.” He thinks something on Germantown Parkway would work. Above all, he’s looking for a spot that fits his demographics. He said he was offered a place that was pretty much ready to go in a part of the city that he didn’t think would work for Rise.

“The demographics of the neighborhood matter. We’re specific about where we know we want to be,” he said.

Fordin is now a master franchisee for the state of Tennessee, which means he’s recruiting other franchisees into the brand.

“At this point, we are looking for franchisees, whether it be someone who wants to partner with us in a location, or they just are looking for an investment and they would like us to manage the location for them, or they want to invest and run it themselves on a daily basis,” he said.

“If somebody has $300,000, they can turn that into millions over a five to seven year period of time if they’re diligent and smart and work the plan the way it’s meant to be worked,” he added.

For Fordin, biscuits have almost an immeasurable value.

“In the South, are there a lot of biscuits? Just look around at the number of biscuit chains that we have in the South. Biscuit love is like a national monument. This is our treasure in the South,” he said.