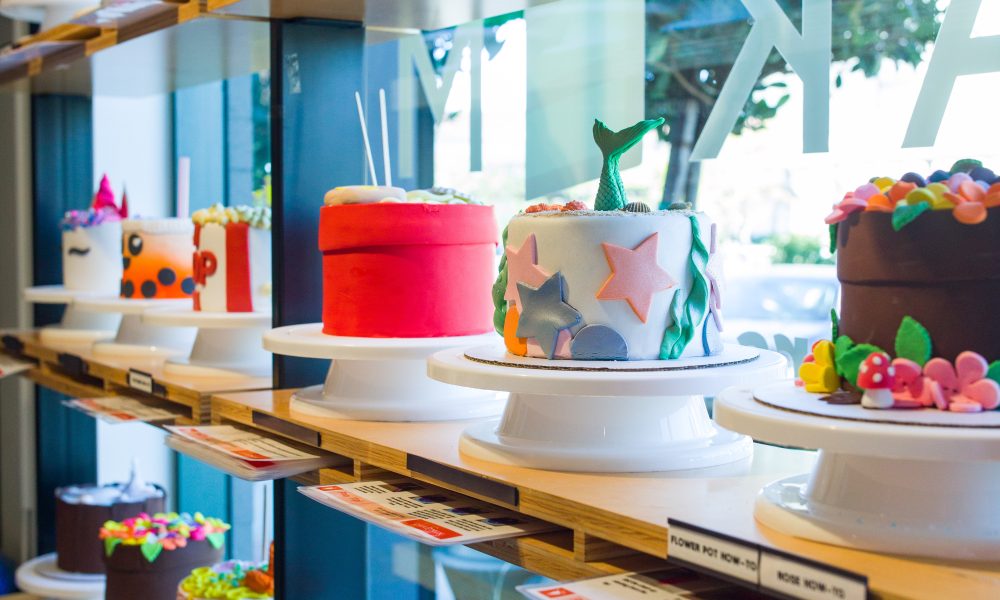 If you‘re an O.C. resident who likes the TV show “Ace of Cakes,” or even if you just like cake, you’ll be happy to know that pastry wizard Duff Goldman just opened a shop in Irvine.

Goldman is best known for using everything from blowtorches to saws to build over-the-top cakes (a life-size elephant, a giant box of crayons) on his popular Food Network show, which ran from 2006 to 2011.

On Monday, he opened the Irvine Spetcrum location, the first Duff’s Cakemix in Orange County. He has four others the L.A. area.

If you’ve ever been to a Color Me Mine studio, the shop looks like that, only with baked goods instead of ceramics.

You pick a pre-baked cupcake or cake (chocolate or Funfetti), your icing (buttercream or fondant) and your toppings. Bins of tools, from molds to piping bags, are at your disposal. When your cake is decorated, you can take it home — or just eat it there.

Duff recently moved to a new house in Topanga Canyon.

“It’s awesome, an old A frame,” he said, adding that he’s building a greenhouse. “Me and my wife are pretty earthy, just hippies, like, hippie rednecks.”

Duff asked Johnna Colbry. who he met on Tinder, to marry him by tying a piece of butcher twine around her ring finger. They wed last year among the T-Rexes at the Natural History Museum in Los Angeles. Goldman made five cakes for the occasion. One hung from the ceiling. Another was made of meat, with a mashed potato frosting.

Colbry is a fiber artist.

“She is really well put together,” he said. “She’s stylish and beautiful. She’s amazing. She’s an angel. And I’m like a troglodyte.”

But she likes cake. And Goldman says they are cut from the same creative cloth.

In high school, he dabbled in graffiti art and metal sculpture and wanted to train to become a pastry chef after graduation, but his parents were leery.

So Goldman graduated from University of Maryland with degrees in history and philosophy — and then enrolled at the Culinary Institute of America in California.

In 2002, he opened Charm City Cakes in Baltimore with some of his artist friends. And they started cranking out some crazy cakes.

The Food Network eventually came knocking, and “Ace of Cakes” began airing in 2006. It lasted 10 seasons, wrapping up in 2011, about the time he opened Charm City Cakes West in Los Angeles.

The baker said a career highlight might be making a life-size, spinning R2-D2 cake for George Lucas.

“That was really cool,” he said.

Cakes have made Duff millions, but he keeps it low-key. He plays bass in an Elvis tribute band and the chef-led cover band Foie Grock. And he and his wife road-tripped to national parks for their honeymoon.

He is into work.

A new season of “Buddy Vs. Duff” (with baker Buddy Valastro) airs in a couple of weeks. He also hosts and judges the “Kids Baking Championship” with actress Valerie Bertinelli. And he’s filming season two of “Duff Takes the Cake.”

“We’re trying to do charity events, feel-good stuff,” he says. “Rich people can afford cakes; we like making cakes for people who can really use one.”

For a recent episode, he made a cake for an LAPD vs. LAFD barbecue battle.

The idea to start a cake decorating studio came to him when he was doing a kids event. He put blank cakes in front of each kid’s chair. No directions were given. The parents were ordered to stand back.

“Everybody had a blast,” he says. “I was like, ‘Man, this would be a really good store.”

The first Duff’s Cakemix opened on Melrose in West Hollywood in 2012.

“The coolest thing is we’re all sucked into our phones all the time, you know, and the kids will have their phones out, but only to find reference material,” he says. “They’re getting dirty, and they’re making stuff. It’s really cool watching their facial expressions when they leave. I know that look because I have that look all the time: ‘I can’t believe I pulled it off!’ ”

The Cakemix shops are not just for kids though. Companies like Netflix and Snapchat have gone there for team-building events.

“Keeping up with the Kardashians” has filmed at the West Hollywood studio, so has “Jimmy Kimmel Live!” Katy Perry shot her music video “Birthday Cake” there (for which his team made 70 cakes). Model Chrissy Teigen is a regular. And Justin Bieber has popped in.

“And I got a lot of friends and family in Orange County, and they’re all, ‘We don’t want to drive all the way to Hollywood,’” he said.

The Irvine Spectrum location is bright and upbeat with Top 40 tunes playing.

I asked Goldman if he ever thought that his baking skills would rocket him to celebrity status.

“You know how there are D-List celebrities?” he said. “I’m like a waiting-list celebrity.”

So are there any big names he would like to make a cake for, but has yet to get an invite?

“I’d love to make a cake for all the folks up on the International Space Station,” he said. “I’d like to bring it to them. Maybe Elon will send me up there.”