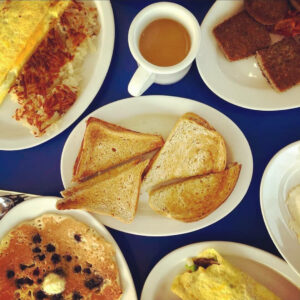 THE CHAIN IS STARTING ITS FIRST FRANCHISING PROGRAM IN COMPANY HISTORY.

Bob & Edith’s Diner understands that growth is imminent, but it also recognizes the path forward may begin with the past.

The 51-year-old diner, now run by a third generation of family members, recently opened its fifth corporate location in Arlington, Virginia—an accomplishment not taken for granted given the COVID pandemic. However, the achievement takes on even greater meaning considering the familial history.

Greg Bolton’s father, who opened Bob & Edith’s, worked at the location 65 years ago when it was a Steak-n-Egg. Bolton worked there when he was 17 years old. As the industry veteran explains, it’s been a breakfast spot for 90 years—Steak-n-Egg for 70, Linda’s Cafe for 20, and now Bob & Edith’s.

Greg’s son, Chris Bolton, knows just how important it was to open the doors once again.

“Even when we were doing the construction, walking around it, there were so many memories, especially for my dad,” Chris says. “It means a lot to him. … We’re definitely excited to be a part of that neighborhood.”

Bob & Edith’s plans to follow up the moment with even more history through its first franchising program. The restaurant is partnering with Fransmart, a company dedicated to growing emerging concepts.

Chris explains that after five decades, the restaurant has evolved to the extent that expansion has become a necessary step. The family believes Bob & Edith’s can become the next big breakfast spot.

“My dad ran the business after his dad with his brother and then me and my sister, we’ve grown up in the business and we’ve gotten older and we always said if we wanted to grow the business, we’d have to stick with it and go to college and get a degree and open multiple stores,” Chris says. “… We see the potential of the brand, and we’ve talked in the past about franchising. My dad has always wanted to expand the business. Just honestly, we feel like all the stars are aligning and we have something to offer to the world. It’s been 50 years in the making, and it just seems like the right time. We’re all ready to go. We’re at a great age, and we’re all hungry for it.”

In addition to two locations in Arlington, the brand is also in Alexandria, Crystal City, and Springfield, Virginia. The restaurant operates 24/7 and serves food cooked-to-order.

Dan Rowe, CEO of Fransmart, said the chain is hoping to extend into the country’s busiest markets. And to save money in the process, the brand will look to convert existing spaces to help franchisees save on opening costs and obtain a higher return on investment. Rowe said this strategy will encourage franchisees to continue investing in more locations, creating a snowball effect of compounding returns.

He compared the level of interest to when Fransmart began with Five Guys, which now has almost 1,500 locations globally. There’s attraction from people around the Washington, D.C. metro area as well as some Fransmart franchisees in other parts of the nation.

Bob & Edith’s thinks the brand can go wherever they want to take it.

“I have loved Bob & Edith’s Diner ever since I moved to this area 30 years ago,” Rowe said. “The brand has real soul—there really was a Bob and an Edith, and the family is still building on their legacy. They love feeding people in D.C., and now they want to feed the world. This is the most pervasive food in America and attracts people from all demographics.”

“The business side of Bob & Edith’s is genius—small, low cost, no frills, mostly conversion restaurants doing more than $2 million in sales in around 2,000 square feet,” he continued. “The costs are amazing, and the menu is widely appealing. It’s a simple operation, and they have mastered off-premise sales better than most fast-casual concepts.”

Bob & Edith’s progress through the pandemic hasn’t been without its struggles. Initially, the diner had to lay off roughly 160 workers. The stores attempted to remain open for off-premises, but one month into it, a manager contracted COVID. The company intermingles staff among stores, so they closed all the restaurants for 17 days to conduct a deep cleaning and to ensure all staff was healthy and isolated for the proper amount of time.

The brand persevered with new technology, updated packaging, a digital-friendly menu, and third-party delivery partners. Chris estimates that Bob & Edith’s is capturing approximately 75 percent of pre-COVID sales. A year ago, off-premises accounted for about 7 to 10 percent of sales, but now delivery is about 30 percent of the business. The restaurant partnered with a marketing company to help them relay its message to consumers.

“It’s the way of the future,” Chris says. “People love getting delivery, and if you do it right and you take care of them, and you serve with the right containers and you check each other and you make sure they’re getting the product they want, I think it’s going to be a large part of the business going forward. I think the world is changing. I think in-house will still be lined out the door like it always has been, I just think that our business is going to increase.”

Chris says Bob & Edith’s has been approached many times about franchising, but the family has always turned the opportunity down because they feared the gamble and potential loss of control.

But the restaurant trusts Fransmart to help them overcome those challenges. Chris notes the first wave of growth will target Virginia, Maryland, Washington, D.C., and Pennsylvania. After that, the diner wants to head down the East Coast and make its way to Los Angeles. There’s also dreams of Dubai, China, and other corners of the world.

Bob & Edith’s thinks the brand can go wherever they want to take it.

“It’s exciting because aside from Waffle House, there isn’t another national diner brand. No one has done anything new in this space in decades, and the market is always looking for the next thing,” Rowe said. “I’m here to say that Bob & Edith’s Diner is the next big thing.”