10 Fast Casuals to Check Out in the Post-COVID Era 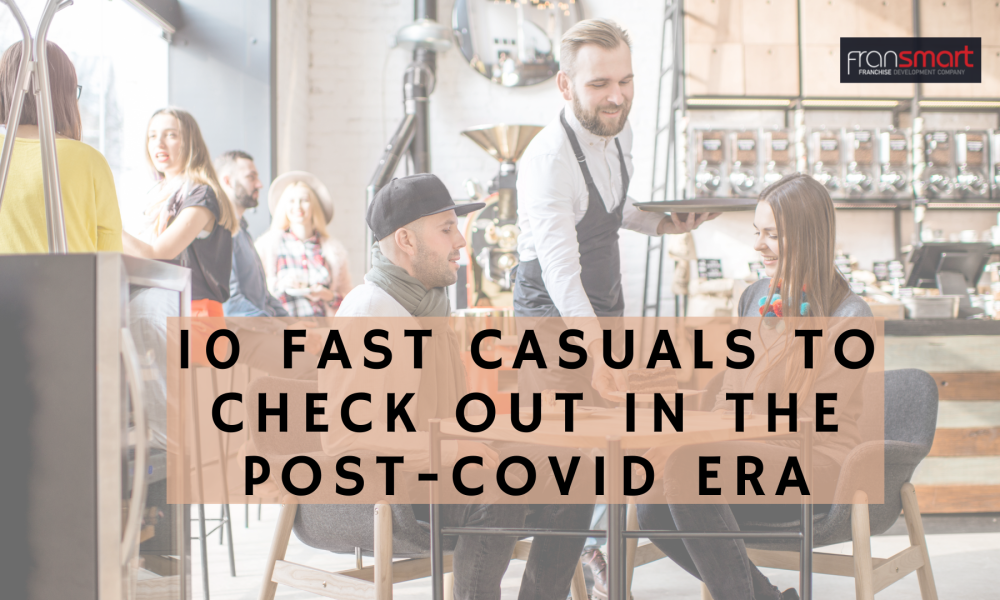 COVID-19 created a perfect opportunity for quick-service brands and fast food outlets. Some of these food stores had to be creative and innovative to develop new ways of surviving during the pandemic.

As more and more restaurants and hotels closed, fast-food joints were the only silver linings during the pandemic. However, the pandemic is now contained, meaning that the world is slowly getting back to normal. Fast food casuals are also adapting to this new normal.

This fast-casual restaurant located in New York City was founded in 2012 by Dave Pesso and Janice Axelrod. Customers could place orders through the website during the pandemic and get the orders delivered right at their doorsteps.

Although the restaurant has several subsidiaries in New York, it is still on a growth trajectory. Because of this, this is a fast-casual to watch in the coming years.

The restaurant serves healthy-focused, fresh, and 100% homemade cuisines in a contemporary environment. Their meals are combined with authentic flavors sourced from the Mediterranean and have been tested by different generations.

Additionally, it’s also seeking partnerships with well-capitalized investors and foodservice operators. Therefore, this is a fast-casual to watch in the post-COVID world.

Ziggi’s Coffee was founded in 2004 by Camrin Knudsen and Brandon. Over the years, this coffee brand has experienced a slow but steady growth trajectory. The brand did not record impressive performance in the first five years. However, two things happened and initiated Ziggi’s Coffee’s growth and expansion.

The first instance was the organic change of its menu. The menu now indicates that this coffee brand offers drinks such as fruit-based drinks and specialty coffee items.

There are also peanut butter blended drinks and Colorado Mocha that are very popular among coffee enthusiasts. Recently, they had the Red Bull-infused drinks included in the menu.

The other thing that changed Ziggi’s operations is its second location’s huge capital investment in drive-through service. The drive-through in this location measures 600 square feet, meaning it can fit two drive-through windows and a single walk-up window at a time.

With these innovations, Ziggi’s Coffee is projected to grow in the coming years as the economy recovers from the effects of the pandemic.

This fast-casual was founded by a couple, Ivan and Allison, in 2012. The founders were inspired by the French cuisines when they were in Paris. They loved the Paris street food and vowed to establish an equivalent in America.

At first, they offered some crepes that failed before they settled on a recipe that turned the business around. The pair spent at least a year planning the company, and when everything was ready, they went to look for renting space near Rice University.

When they set up the business, they were determined to offer a unique product in a European-friendly environment to attract European customers.

Therefore, they chose a design that resembles the European bistro setting, alongside chandeliers, open kitchens, and Venetian plaster. Later, they opened a second café in Houston.

The second location was bigger and gave the customers a better experience. Of course, the founders still have plans to expand and reach more customers, which is why this café has been one of the fastest-growing fast casuals in the last two years.

Pizza Factory fast casual is located in Oakhurst, California. During the pandemic, Pizza Factory benefited from the online ordering services and its customer loyalty app.

Before the pandemic, the Pizza Factory management had plans to expand the business and increase its market share. They had already developed the Express model that offered services off-premises only.

Pizza Factory allows business entities and franchises to start pizza joints without heavy capital investment. Because of this, franchisees can partner with Pizza Factory and start a business in a 1000 square feet space.

Since starting a business in a new location has been made easy, more companies will be opened in the coming years as the economy recovers.

As a result of increased pizza locations, Pizza Factory will expand its market share. So, it’s one of the fast casuals to watch in 2022 and beyond.

This fast-casual was founded in 2019 by a group of businesspeople led by Adam Weiss. Weiss had an idea of regulated crowdfunding to enable a business to raise funds from willing investors.

His concept was to create an opportunity for anyone above 18 years to purchase a part of a private business and become a shareholder. His idea was considered successful because he managed to raise $1.07 million in six weeks.

He created a pool of 1400 investors who purchased a part of the business. According to the Start Engine crowdfunding platform, Honeybee Burger was ranked as the fastest-growing food and beverage joint in 2019 and 2020.

One of the founding partners is an experienced designer who worked for Wall Street. Therefore, she was tasked with the responsibility of creating the store design. According to Weiss, the store design and colours are unique because they reflect nature and agriculture.

The expansion plans are still in place, and only a matter of time before the store opens new locations in the coming years.

Clean Juice is a North Carolina-based fast-casual that was founded in 2014. With estimated annual sales of about $41.2 million, this store has succeeded because it keeps updating its menu to include innovations.

Before making changes, they often conduct market research studies and surveys to determine what their customers want.

This fast-food chain is not just a juice bar because it offers salads, acai bowls, and wraps. These are some of the popular foods among customers during the lunch breaks. Recently, the chain opened a new location to increase its market share.

The new store offers organic sandwiches such as salad, buffalo chicken, and Cali. In most markets, a sandwich will cost less than $10 and can be combined with an organic smoothie for $15. The chain is expected to expand even more post-pandemic.

This New York-based fast-casual was founded in 2014 by Jason Mazzaarone. Since its inception, it has increased its market share over the years. In 2020, the annual sales were estimated to be $22 million.

Mazzarone is planning to open 22 new locations by 2022. This continued growth plan will be supported by different franchises that are willing to partner with Jason Mazzarone.

Each franchise will need to pay $30,000 to sign a deal and be allowed to open their independent joints. Therefore, the business has opportunities to expand in the post-pandemic era.

This chicken and salad joint is one of the popular fast casuals in Oregon State. It was founded in 2015 by Debbie Gorton, Dennis, Kinnell Steward, and Jon as a charity event to collect money for a friend who was diagnosed with cancer.

However, the business became a renowned fast food joint that offers sundaes, rice, and chicken. This restaurant drafted an accessible menu for people who are gluten-free or have celiac disease.

As it continues to expand, one can only speculate what the future holds for this restaurant as the economy recovers from the effects of the pandemic.

Bluestone Lane is a New York-based fast-casual with estimated sales of $50 million. It was founded in 2013 by Nicholas Stone. This coffee brand has plans to expand by opening hundreds of new locations. The company planned to open 60 new locations in 2021 and at least 20 in 2022.

Once these new joints are opened, the company will have expanded its market by far. The market may expand even further in the following years as the economy will have recovered from the effects of the pandemic.

This food retail store was founded in 2012 in the Hawaiian market because it was converted into a permanent store in 2014. Currently, there are ten such stores in the US and 2 in Japan. Their menu has smoothies, lemonade, sandwiches, acai bowls, green bowls, and nut butter toasts.

In 2019, the store purchased another store and moved its headquarters to Arizona. Additionally, the company has accelerated its franchising efforts to increase its market presence. Therefore, this is a fast-casual to watch in the coming years.

The COVID-19 pandemic affected almost every part of people’s lives, including what they eat. However, fast casuals benefited more from the pandemic than the typical hotels and restaurants.

Fast casuals have continued to grow and expand as hotels close. As listed above, ten fast casuals are expected to grow in the coming years after the pandemic.