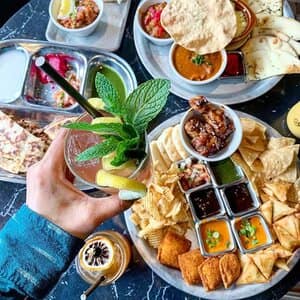 It’s easy to see why franchisee partners Ankita and Dharmesh Mehta picked Grandscape to open the first of six Curry Up Now restaurants. The mammoth mixed-use development is in North Texas, with a population of 6.5 million. More specifically, The Colony, the Dallas suburb where Grandscape is located, boasts a median household income of $83,094 among 44,438 residents, per U.S. Census data.

What she likes about her new franchise is the same thing she likes about the old one: Food prep is simple. “You have a 10-ounce bag of curry, and you have to put 2 pounds of chicken in it.” To make golub paneer, “it’s a 6-ounce bag you mix with 10 ounces of paneer. So it’s the same tastes every time, and anyone can do it. We don’t even need a kitchen manager.”

She said the menu sets the restaurant apart from its many competitors in Dallas-Fort Worth. The area is home to one of the largest South Asian populations in Texas, while the state, in fact, is second only to California’s South Asian population (815,948 to 452,598). Curry Up Now is based in San Francisco.

The restaurant’s menu features familiar foods with Indian-flavor spins such as a tikka masala burrito, fried ravioli, tacos and its signature Sexy Fries, an Indian-inspired poutine.

The FDD’s Item 19 shows gross sales for company restaurants in California ranged widely over the last eight years—from $846,910 to $3,592, 500—depending on location. There were six company-owned outlets at the end of 2019. As of November, franchisees had yet to open a restaurant.

The Mehtas will use an SBA loan to pay for their first Curry Up Now and possibly the others. The financial strategy differs from their Cold Stone Creamery past, when the couple paid cash for each outpost, including a ground-up build. But those units were considerably less expensive to open. “Curry Up is a big investment, so I would get loans for that,” said Ankita, Curry Up Now franchisee.