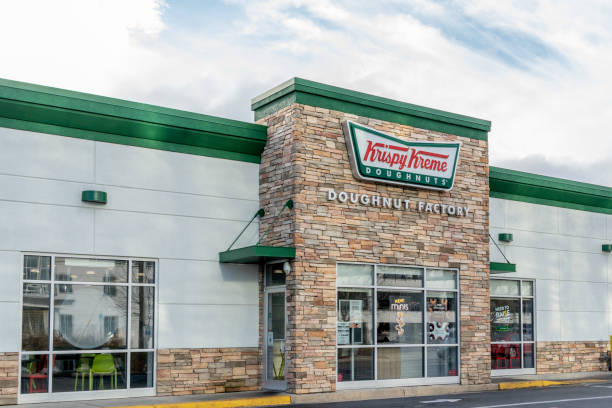 Back to Fransmart Blog Page

Top 5 Reasons Why Not to Buy a Krispy Kreme Franchise

Krispy Kreme is one of the most famous doughnuts and coffee shops globally, especially for its glazing, warm and fresh […]

Krispy Kreme is one of the most famous doughnuts and coffee shops globally, especially for its glazing, warm and fresh Doughnuts — but despite its success, it’s not an enticing franchise to join. Although donut chains are some of the most popular restaurants in America, the Krispy Kreme franchise has a confusing and opaque application process, competitive market share, long working hours, and low ROI that leads to rejection and discourages franchise candidates.

About Krispy Kreme – Bad and Good

Vernon Rudolph, in 1937, built Krispy Kreme, primarily selling Doughnuts and complementary products such as packaged sweets. The company does business through retail, wholesale, and franchising Krispy Kreme stores. As of August 2021. Krispy Kreme had more than 200 domestic franchise stores and 1000 international franchise stores.

In 2021, Krispy Kreme has some bad news. The business, like many others, is facing intense pressure from higher commodity costs (the wheat and sugar that goes into doughnuts). Doughnuts will be more expensive — and the company expects to raise prices by even more than it already has to offset the higher input costs.

The company had net revenue of $349.2 million in Q2, an increase of 43% year over year. Net loss, however, reached $17.1 million, an increase of 41.3% compared to the same period last year. Currently, the company has $37 million cash on hand, with no significant change from the previous quarter.

Like all investments, the franchise model also has its share of risks involved. There could be many reasons for the franchise not to be successful. These reasons can be related to change in market trends, franchisors’ weak FDD, or the incompetency of a franchisee.

For instance, due to unforeseeable circumstances like covid-19, the market was not good to recover the cost of a franchise. In some cases, it could be about your lack of expertise or passion for the business.

Opening a franchise is a considerable investment in terms of money and time. To avoid failures, you have to do your research well about

We thoroughly researched Krispy Kreme, its competitors, and franchisee feedback to determine whether or not this franchise would be an excellent fit for you.

The Top 5 Reasons For Not Buying Krispy Kreme Franchise:

We have seen Krispy Kreme franchisees leave the system, citing poor profitability rates or lack of support. Compared to its competitors on critical factors like growth, debt, employee satisfaction, and brand reputation, the company is falling behind.

#1 Krispy Kreme Has A Small Percentage Of Market Share:

Krispy Kreme propagates itself as a “sweet treat retailer.” However, the firm operates in the QSR (Quick service restaurant) industry. The industry’s worldwide revenue in 2020 was about 610 billion dollars. Though there is a growing demand for fast food and beverages, it doesn’t mean all QSR firms are on equal footing. In 2020 Krispy Kreme had a sale of approx. $1.2 billion, which means Krispy Kreme held only 0.2% market share, which is way lower than competitors such as McDonald’s (15.3%) and Starbucks (6.5%).

With little scope to differentiate, it is rarely possible that Krispy Kreme will capitalize on the market share from larger competitors. Especially if firms like McDonald’s started to compete more directly by introducing more bakery and breakfast items as they had recently done in October 2020.

A 2015 survey states that 49% of global respondents felt they were overweight, 50% said they were trying to lose weight, and 62% of those changing their diet to lose weight said they were cutting down on sugar. More recently, a 2019 survey said that 75% of people want to eat healthier today than what they were eating ten years back.

Krispy Kreme, a doughnut company, cannot sustain its high sugar menu in today’s times. During this pandemic, the consumers are also becoming health conscious and choosing a healthier option in eating.

#3 Competition With Bigger And Better Names

The recognition and popularity of brands like Dunkin donuts, McDonald’s, or Starbucks are much more than Krispy Kreme. Krispy Kreme may have a long history and past popularity, but it quickly loses its name with the competition today.

Krispy Kreme has always believed in growing aggressively. Since being taken private in 2016, Krispy Kreme has focused on increasing sales through increasing points of sale. They have grown from 5,926 in 2018 to 9,077 in fiscal 1Q21.worldwide.

The problem here is you might be the first to open a Krispy Kreme store in your area, but you could find yourself competing with another franchisee down the line. Franchisees are not granted any exclusive territory or protection. According to the company’s FDD. “We reserve the right to operate and to grant others the right to operate stores and commissary facilities at any location on such terms and conditions as we deem appropriate.”

While new stores meant more money for the company, it was always bad business practice for franchise owners whose profits were compromised with multiple sales points.

In the initial days, glazed donuts used to be so popular that people would wait in lines for a taste of the mouth-watering dessert, freshly prepared in front of customers’ eyes. Capitalizing on the popularity, Krispy Kreme sold its brand everywhere possible – ranging from gas stations to kiosks – which took away the product’s charm and resulted in much lower profits for the franchise owners.

Depending on the store format you plan to open, you could wait up to 65 weeks between signing a franchise agreement and opening a store. The FDD states it could take as long as 18 months to open a Factory Store and as little as two months to open a Fresh Shop.

The time may be increased or reduced depending on the location and condition of the site, the construction schedule, the extent to which an existing area will need to be renovated, the delivery schedule for equipment and supplies, and getting the necessary permits. The franchise managers must also complete training of at least 30 days before opening.

You will also have to do 16 weeks of off-site training before you can open your store. According to the FDD, franchisees should expect 40-50 hours a week of training in weeks one through eight at a store location on production, retail, processing, and shift management; which means a lot of non-working paid hours for the company, which will be a considerable added expense.

A franchisee is a great model of investment. If you have enough capital and resources at your disposal, you can rent a business that has been proven successful. A franchise is all about the brand and the value it has created in the minds of customers.

Franchise owners allow franchisees to use their name and recipe secrets for a fee or even profit share. This model is a win-win for both the brand owner and a franchisee (franchise taker). It provides an investor with a successful name and product to work with, allowing a franchise owner to expand business in different territories.

So, if Krispy Kreme doesn’t strike the right flavor for you, you can choose from many other famous and successful food franchises options available for your palate.

Back to Fransmart Blog Page